A match made in heaven: a Kostal MDW meets The Tree

A magical MDW from Jason Kostal, complete with the fabled mahogany Tree tonewood, is incoming to TNAG. With this tonewood becoming increasingly sparse, this guitar is likely to be one of the last sets of The Tree to come out of Kostal’s Arizona workshop…

Kostal’s MDW is no stranger to TNAG readers. Since being introduced in 2016 through close collaboration with UK fingerstylist Michael Watts, the MDW (Modified Dreadnought Watts) has quickly become a TNAG favorite.

“The MDW was an amazing project in which both Michael and I described what we wanted a guitar to do, and what we needed it to do, and then set out to create the guitar to meet those high expectations,” Kostal says.

“The body is similar to a scaled down version of the standard MD, adding to its comfort and playability with total dimensions that make it only slightly smaller than the OM. The 12-fret body joint adds a level of beauty, warmth and sustain not experienced in other guitars, and the overall size and look is elegant in every way. This guitar was originally intended to be a one-off but it has since become my most popular model, and with every new MDW I make, I am reminded of just how extraordinary this instrument is.”

“The creation of the MDW was the result of wanting MD focused tonalities while packaging it in an OM sized box. When I first started making guitars everyone wanted the larger bodied MD, but as we get older, most of us find that the smaller bodied instruments are easier for us to play both in size and scale length and so the MDW and OM have become my biggest selling guitars.”

When did you first start penning the design of this sensational model? How long does something like this take? Must have been nerve wracking to hear the first notes played?
I started the conversation about the MDW back in 2013 or so, but honestly just was not in a position to create a new model. I was already working on releasing my OO down the road, and the idea of redesigning a guitar just seemed daunting, and so it was a discussion that happened regularly, but I just didn't know when I would get around to it. At that time, everyone seemed to want an MD or an OM as well, so the need just didn't feel like it was there either.

Creating a new model seems so simple, and maybe for some it is, but for me it takes a really long time. I don't have the ability to do modeling and testing in a CAD program, and so for me, everything is done in my head based on my understanding of how the guitar works, and how my guitars specifically respond to the player. Choosing a scale length, locating the braces, style of the braces, dimensions of every aspect of the guitar, etc all have an effect on the outcome and each one has to be considered when going through the design part. What seems like a good idea one day becomes mitigated by an idea a few days later as you are thinking about another aspect of the guitar and so it all begins again.

Start to finish I probably spent 7-8 months deciding what I wanted this guitar to be, what I wanted it to do, and how it would be different from what I already offered. That doesn't include the time then spent making the templates and setting up my shop to build this guitar. Stringing it up for the first time was truly special. I believe in being honest about your work, and if something isn't what you expected it to be, you need to be honest about that no matter how hard that may be. In that moment though, this guitar exceeded my expectations, and I truly felt like I had created what I set out to accomplish... and more.

Your OMs are like no other in the world, rich, full, versatile and packs a punch. Your MDs are huge sounding, powerful, incredibly articulate and yet so very sweet to the lightest of touch. How do you then combine these to produce such a staggering instrument like the MDW that does it all?
I honestly think a big part of the sound that this guitar generates is the 12-fret body joint. I was never really a fan of 12 fret guitars. I owned some vintage Martin OOs and for the creation of my OO the 12 fret just worked and seemed right from a size standpoint, but I grew up playing OMs and 14 frets was what I thought everyone needed. The number of frets at the body joint determines the location of the bridge. With a 12-fret body joint it places the bridge more in the center of the vibrating area of the top, creating a more balanced and effortless system. The result is a beautiful warmth and sustain coupled with nice articulation through how it is braced and built. The end result is a beautiful mix of the MD and OM that still maintains some level of intimacy for the player. The result is an exceptional playing experience that most people notice and enjoy.

We’ve seen many MDWs pass through our website over the last five years, but there’s something special about one that is on the way…

The MDW about to arrive boasts a German Spruce soundboard with The Tree mahogany for back and sides. The story of the Tree is well told, but let’s quickly explore its provenance and importance. 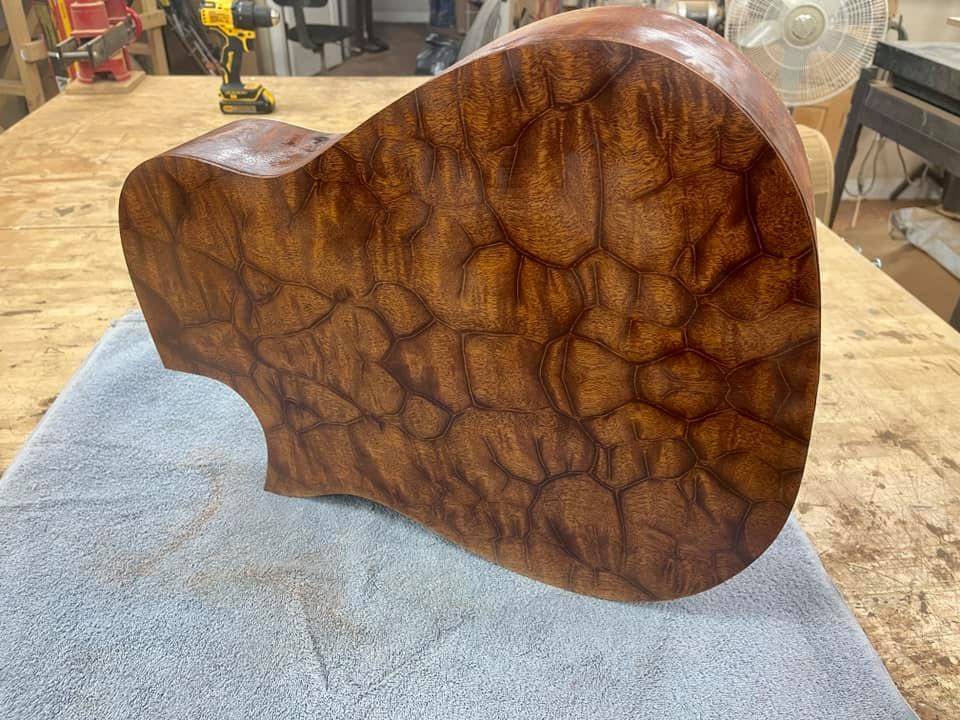 The world’s most coveted tonewood?
The mahogany tree in question was discovered in 1965 in the Honduran rainforest of Chiquibul. It was reportedly over 100 feet high and 10 feet wide. Best estimates put its age at around 500 years old.

Having arduously prepared the tree for felling, the loggers watched as this towering beast of a tree didn’t fall where they intended—it fell backwards into a ravine, unable to be extracted due to the limited machinery on hand. While unfortunate for the loggers, this was fortuitous to the Tree and its story. The Tree stayed in that ravine for the next 10 years.

In the late 70s, Sawmill owner Alan Mauney stumbled upon The Tree in his search for timber and mentioned it to Robert Novak, a specialist in importing woods. Novak recognized its significance, purchased it and began a plan to extract it from the ravine deep in the rainforest. It’s location, size, and the obstacles surrounding it did not make it an easy task for Novak.

They decided to cut The Tree into quarters where it sat and then cut those quarters to length. They then dragged the sections out of the ravine and made the 100-mile journey through the jungle to the Chiquibul river.

Once at the river, the logs had to be floated a final 70 miles downstream to an old, steam-powered sawmill where Novak supervised all the processing, which required nearly two weeks’ work, yielding 12,000 board feet of timber. The wood was then shipped to the US and kiln dried for 30 days.

To guitar makers and players, this wood would not become known as The Tree for at least another decade.

The Tree… where do we start! What is it about the legendary wood you love from a builder and players perspective?
I think the biggest thing about using this wood is that it is unique, rare, and there is literally a diminishing, finite amount to it. Unlike any other wood on the planet, each time we build something out of the Tree, there is no refill on the supply. We are already repurposing tables and furniture to make guitars, and I don't know of anything that can be made out of a repurposed guitar, so that is pretty much its final state. It’s a stunningly beautiful wood and I am fortunate that my guitars are in a price point that allows me to use some of the finest woods on the planet. That means that when this wood is all gone, there will be some pieces of my work that remain to showcase its beauty and allow music to be made in the world. While a table itself is art and beautiful to look at, a guitar allows one to create art indefinitely and so that feels like a much greater gift to me.

Is this MDW really one of the last Tree guitars you will build?
It really is. I don't want to say "never", but the truth is that it is getting harder to price and source accurately. There is only one person in the world actively seeking out this wood, and when he finds it, he prices it based on quality and availability coupled with an estimate of how much is left out there. That means that this wood has a bit of a sliding price point as a buyer, which makes it hard to price and plan for. If I don't have a set available, or the sets he has available are not visually what I am looking for, then I have to wait until the right set comes along. When that happens, it may be for a price much higher than I quoted in the original order. I always honor my prices and never go back to a client and ask for more money, but that means I end up eating a lot of the cost when things change unpredictably. From a business standpoint that is a bad business practice and so I am slowly moving away from this wood as the prices keep going up, quality changes and availability makes acquiring it difficult.

Thanks to StewMac.com for information on The Tree tonewood. 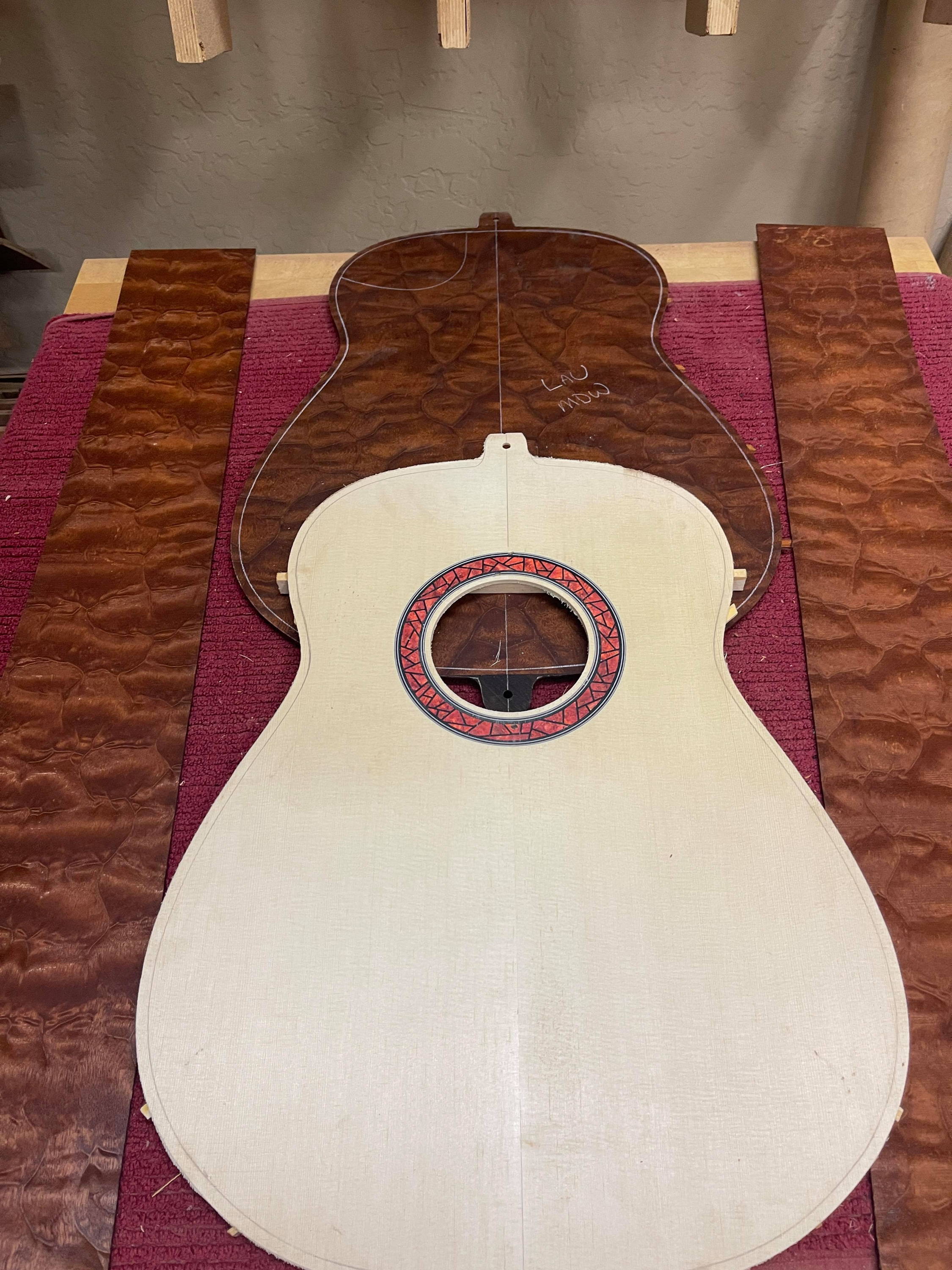 Pre Order This Kostal MDW in The Tree