For this latest Behind Bespoke, we're chatting with the one and only Ted Åstrand, whose sought-after guitars only visit our showroom rarely and briefly!

The first apprentice to Jason Kostal, Ted has been building in his own workshop in Gothenburg, Sweden since 2010. Each and every one of his guitars is slowly and exactingly crafted, and he eschews flashy appointments in favor of a Scandinavian-influenced elegance. The end result is always perfectly balanced, both tonally and visually. Playing one of Ted's guitars is an effortless and satisfying experience, with no overpowering frequencies or dull notes. Even the most simply appointed Åstrand will garner remarks on its inherent, understated beauty.

Unsurprisingly, Ted's guitars have attracted many players, so he's no stranger to the custom Bespoke process. Read on to hear his thoughts about crafting instruments for individual players!

"To go back to your previous question regarding ”comfort zone” — it is probably more often a client pushes me out of my comfort zone which very often leads to new exciting ideas and work. Most of my favorite guitars I have built have been heavily influenced by ideas from players I’ve worked closely with."

Ted, thank you for taking the time to share your thoughts with us today! So first off...how would you define bespoke and what does it mean to you?
The word bespoke defines what I do. Every guitar I make is pre-ordered and specifically tailored towards an individual. I personally love the interaction between me and a client. It’s what sets us builders apart from the larger manufacturers.
It’s all about building that specific special instrument for one person's specific needs and requests. I very much also believe that not only the joy of receiving a custom guitar should be an unforgettable experience but so should the journey of its creation. That’s something you at TNAG do so greatly, sharing the experience of the build with blog posts, pictures and videos of the finished instrument. 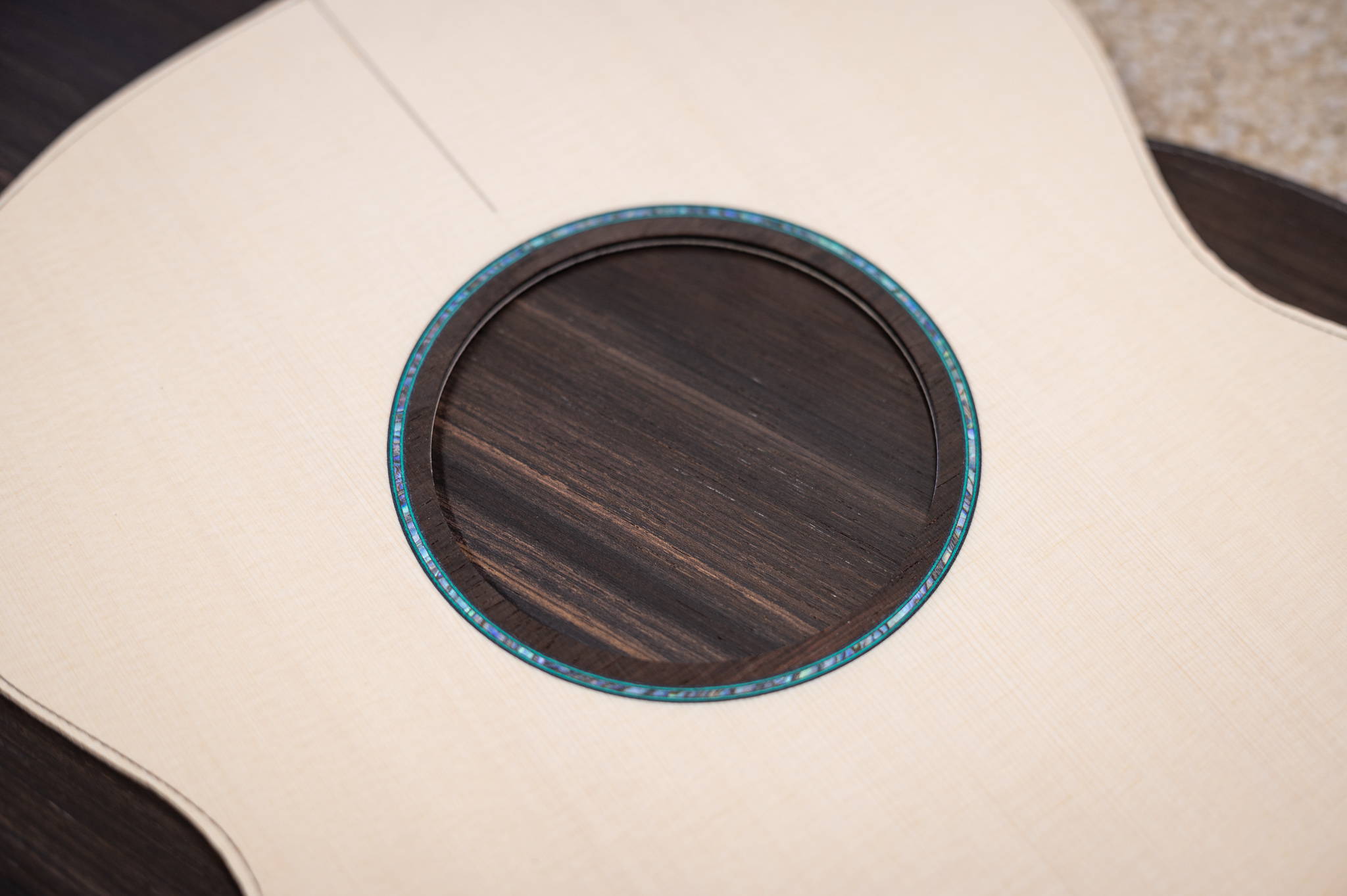 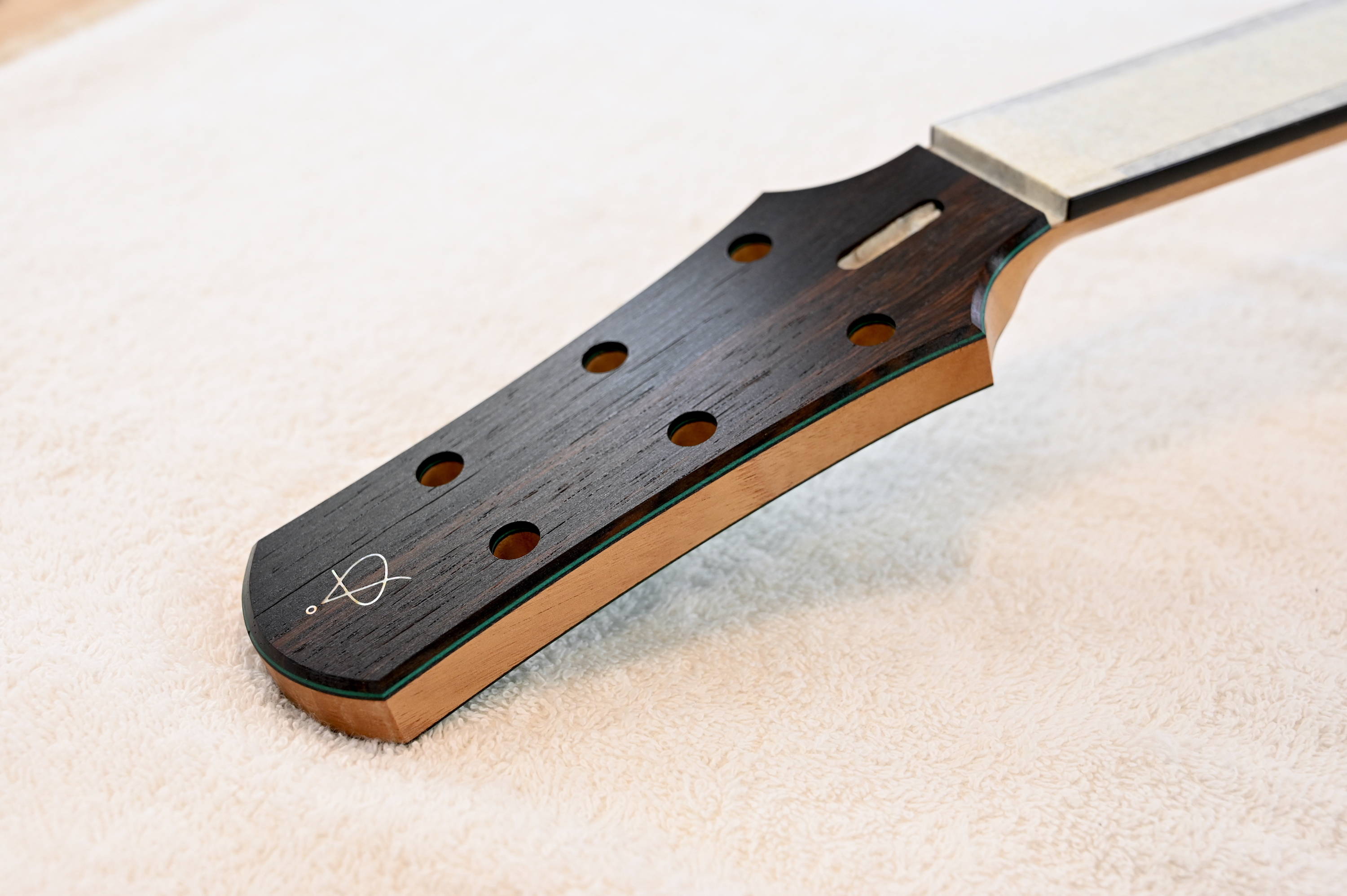 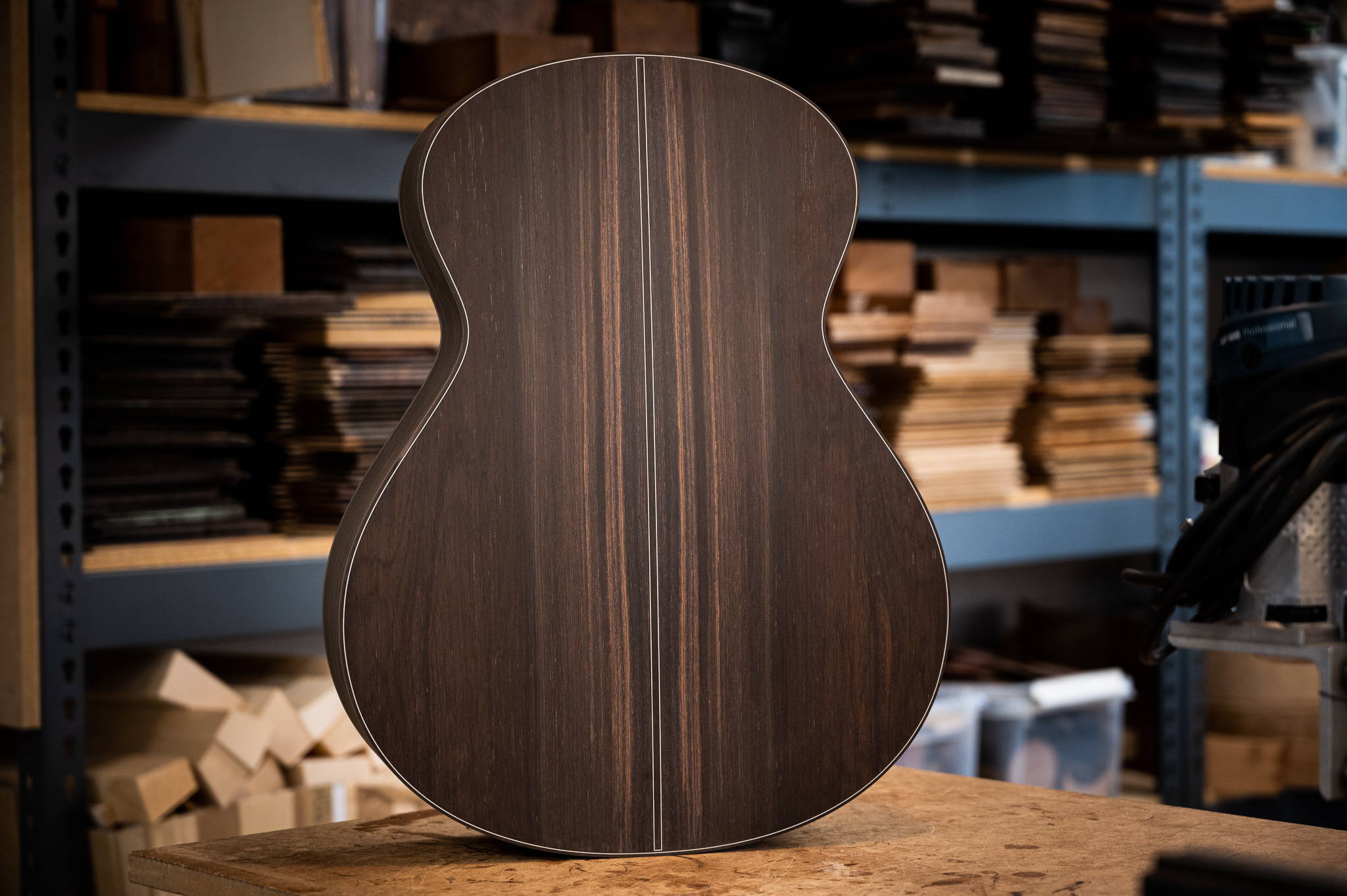 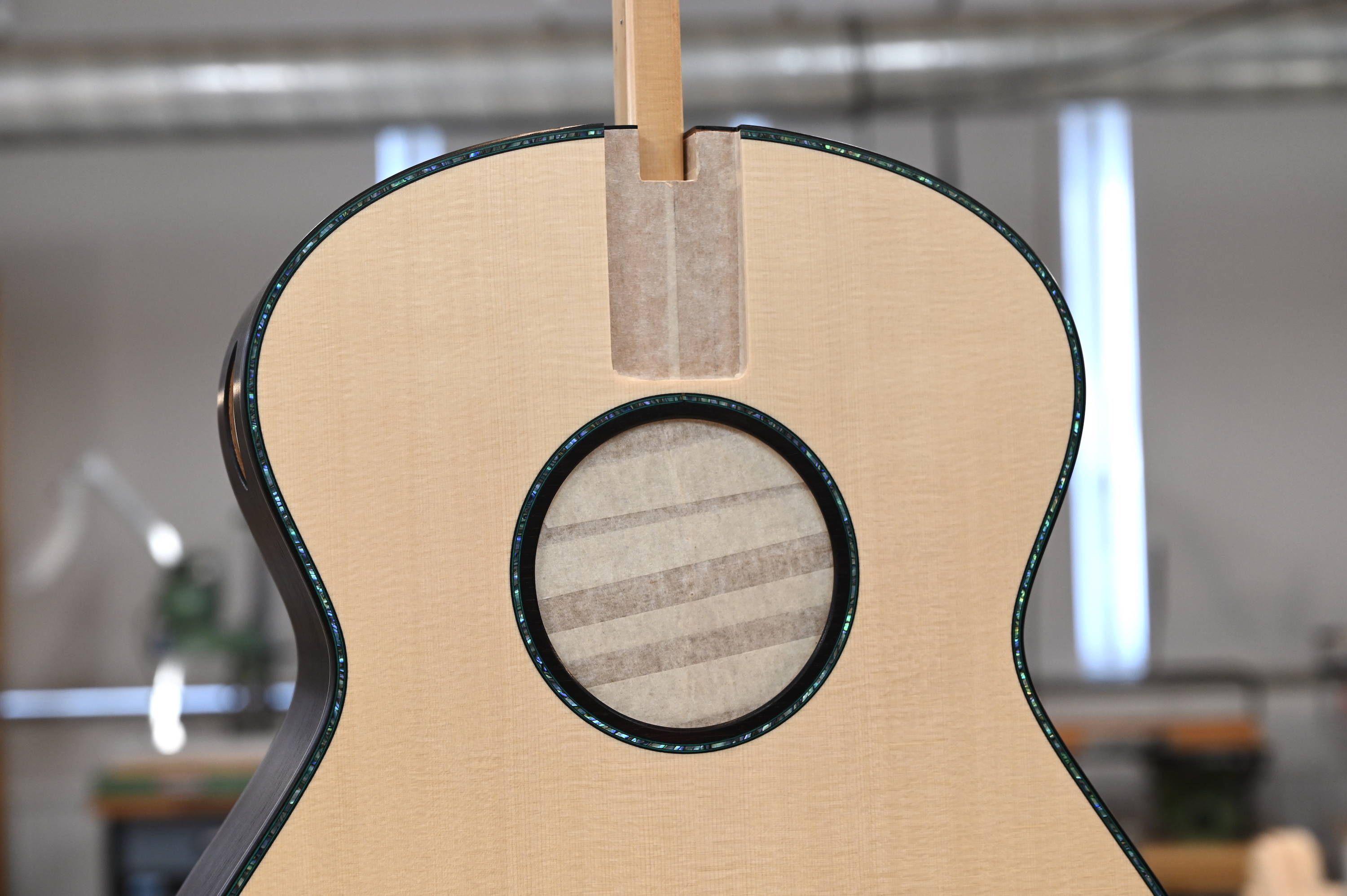 We love being a part of that process, and you do such a fabulous job of capturing the journey! What does bespoke give a player, that building a spec or stock guitar doesn't?
Ordering a bespoke guitar gives the player the absolute freedom to pursue that dream guitar. First step is finding a builder that suits your needs. There’s many of us that build in different styles both from a tonal and visual perspective. That’s what’s so great about TNAG, having a rooster of builders to choose from and the expertise from the staff to help guide the player. Then when that connection has been found the process of discussing everything from the tonality, playability to the aesthetics and design can be a magical experience.
Absolutely. Bespoke incorporates aesthetic, playability/ergonomics as well as specific tonal considerations. Do you find the customers tend to focus upon a specific area within this?
Each client is very different. Some come to me because they love the way my instruments sound and don’t want to interfere with the tonal attributes at all, only focusing on aesthetics/playability and making the guitar unique and personal. Some have more tonal considerations and want the guitar to be tonally tailored to work for a specific tuning, playing style, string choices, etc. and sometimes it’s a mix of all. It’s the variation in this craft that makes it so fun and special to me. Each client/player will be different and in result each instrument as well.
How do you interpret what a customer asks for? And how do you put all of these elements together?
Many of us have a different vocabulary and meaning when talking tone. Using words like warm, full, deep, sparkly, shimmering as examples when discussing sound, it can be subjective. However often when speaking to someone you will very quickly zoom into a similar understanding. Having quite a lot of recordings/videos of my work also helps as a base when discussing. Most of the time people contact me because they like my sound and want something similar but perhaps with a slight alteration to suit their needs. From a visual and design sense I have a lot of my previous work photographed on my website that people can look through and find inspiration from. Most of the time people tend to leave a lot of the work/design up to me but I always love to incorporate something unique and personal to the player. All of the elements are put together with a constant flow of communication, I always send work in progress updates/pictures and communicate on a weekly basis throughout the process of the build. 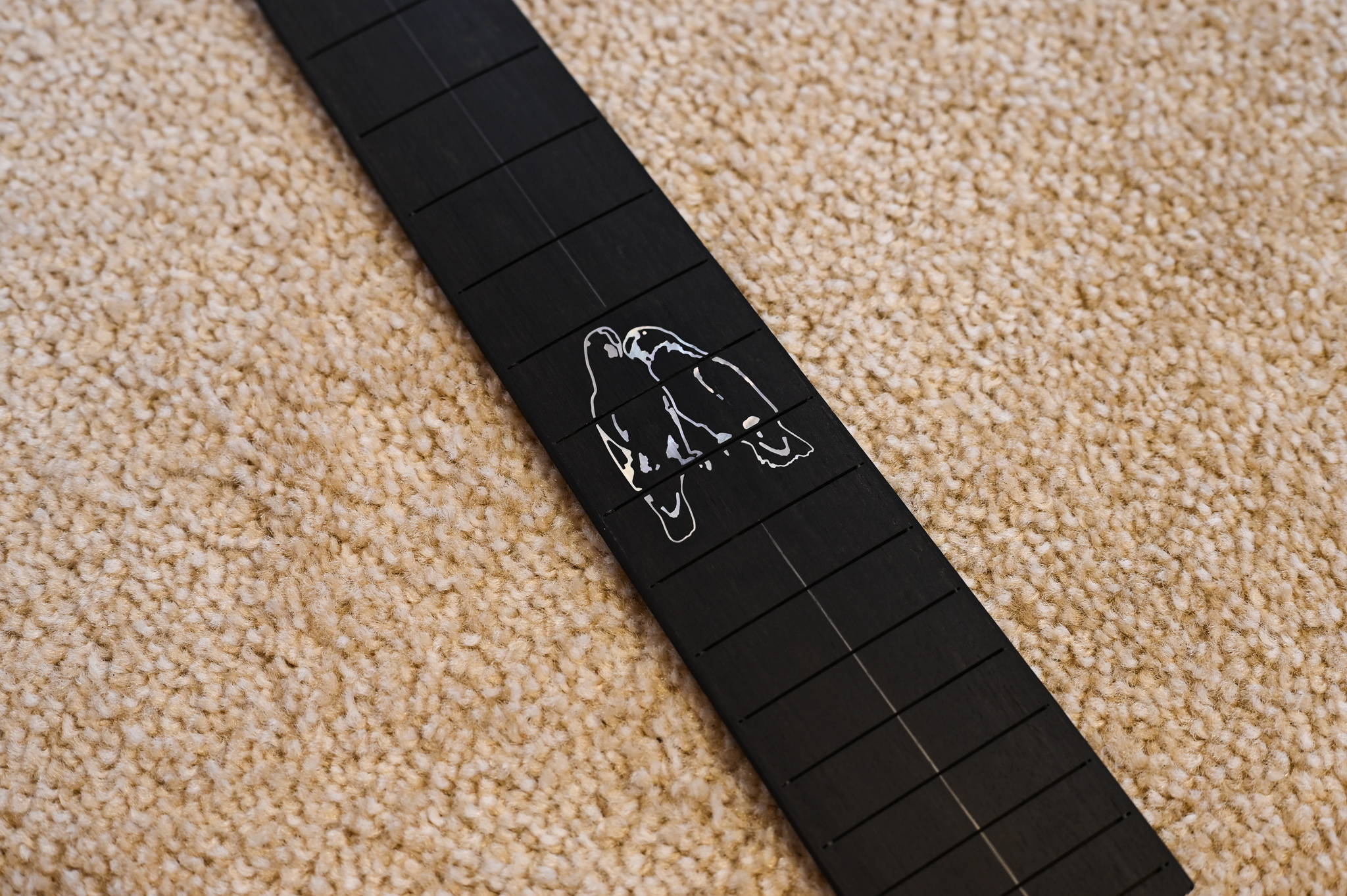 Is there one tonewood you always think customers should explore?
I’ve probably said it too many times: European Alpine spruce. I use both Swiss and Italian and its always my tonewood material of choice.
Agreed—that seems to be the collective favorite soundboard these days! What is it about the bespoke process that takes people out of their comfort zone?
Good question. I’m not really sure that I have ever experienced that someone I have worked with feels out of their comfort zone. However, perhaps the feeling of having something completely new, unique and built for you can be a new experience for many. The array of choices like choosing tonewoods, specifications, neck shape and tonal attributes can be a lot to take in. However I often find the process flows very smoothly and is as enjoyable for me as the player. 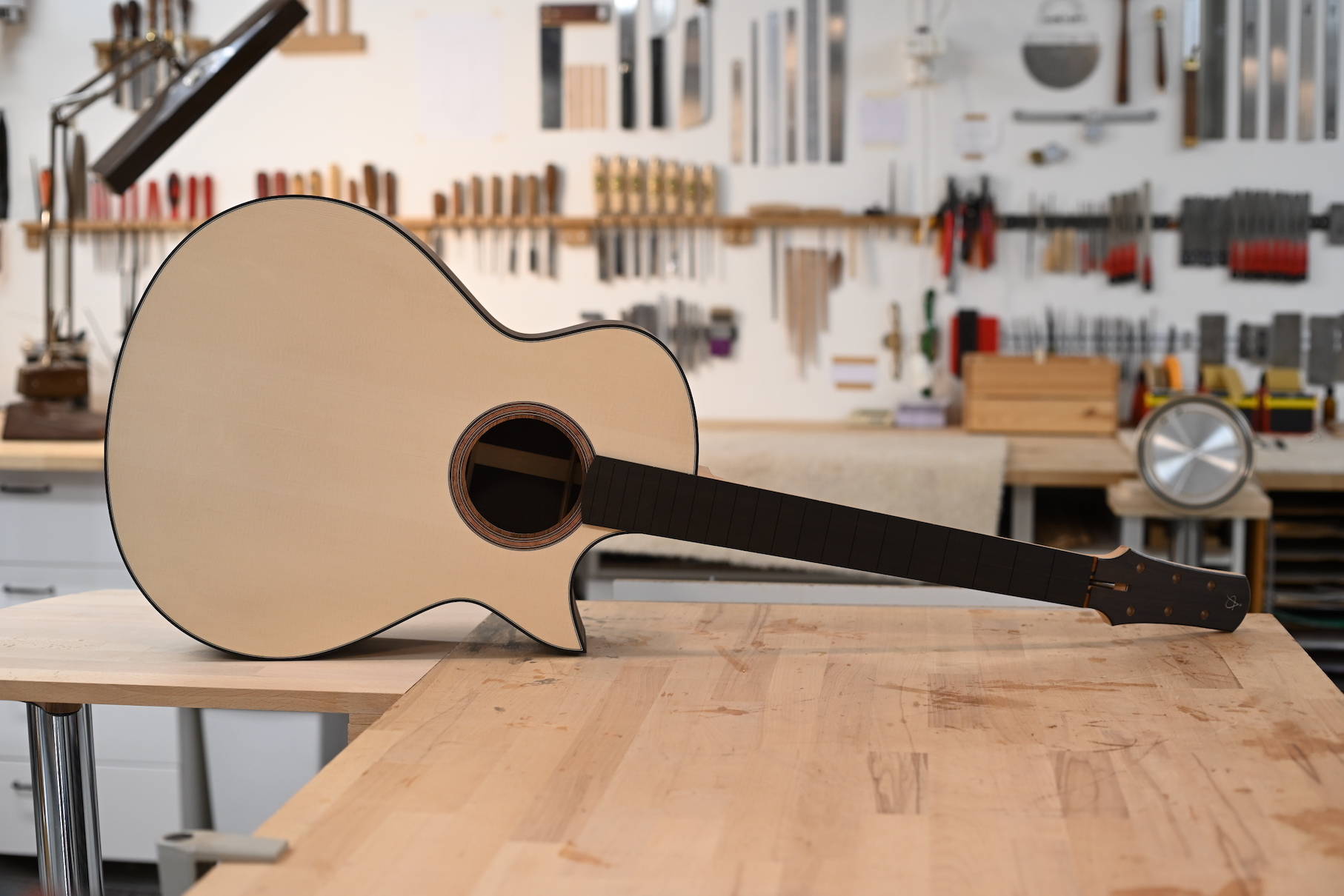 What is the scope of specific customizations and requests that you receive?
It really does vary from guitar to guitar. Most if not all will have some kind of request or a customization. It can be something small like a custom nut width or string spacing, or something larger like a guitar that is specifically voiced and built for a specific tuning or musical playing style. Most of the guitars I build are customized to the extent that the player/client will be a part of the process of personally choosing the tonewoods, discussing thoroughly the tonal requirements, neck shape, ergonomics and what the guitar will be used for. Most also choose to add specific inlays that either have personal meaning to them or will make the guitar unique and one of a kind. I am very flexible about custom orders and since every guitar is handmade the possibilities are often endless. 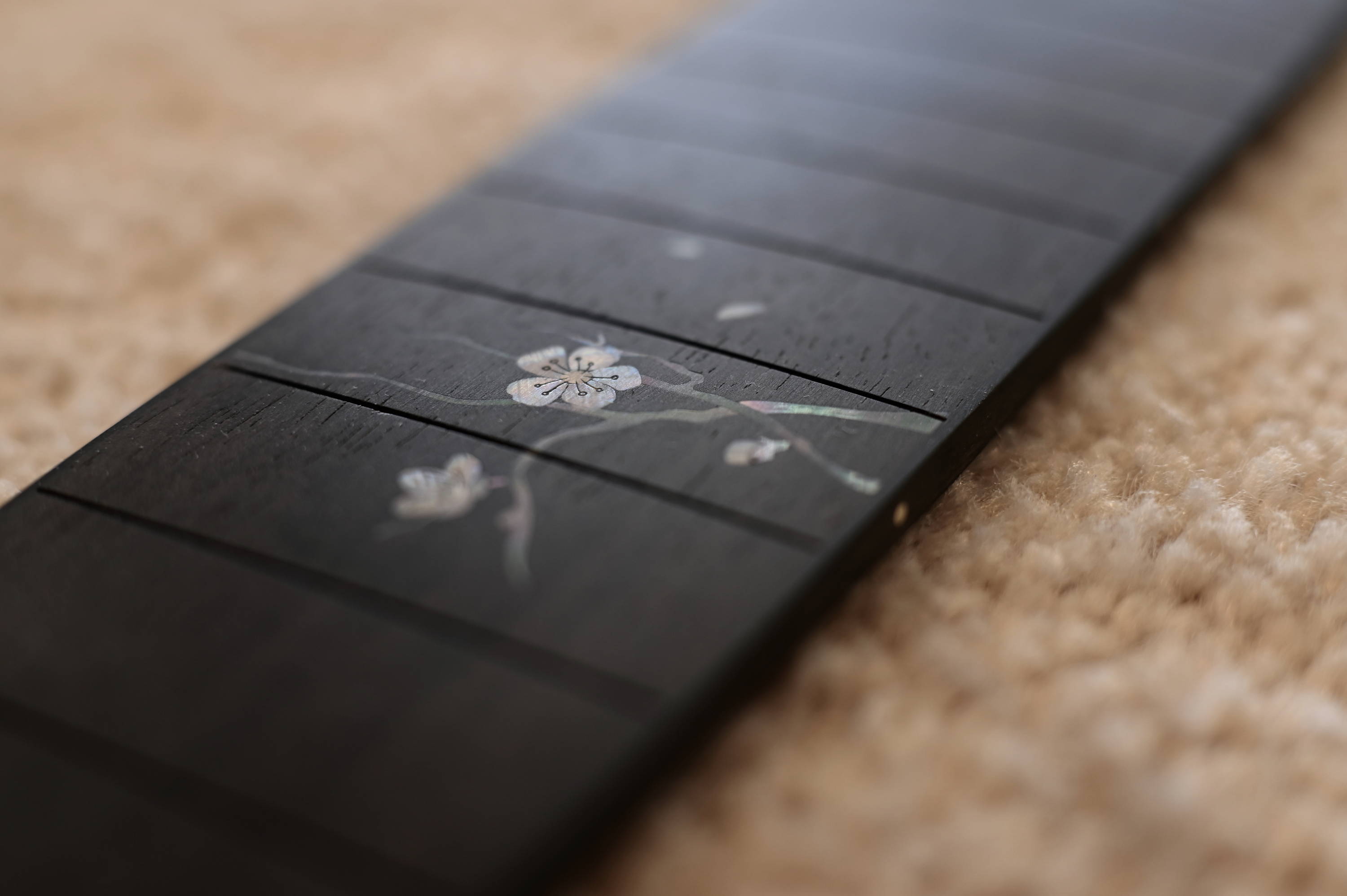 "Most also choose to add specific inlays that either have personal meaning to them or will make the guitar unique and one of a kind."

What do you love most about building bespoke?
The interaction with the player/client. I really do enjoy the conversations and the process of setting all the specs of the instrument. Creating something new and unique. To go back to your previous question regarding ”comfort zone” — it is probably more often a client pushes me out of my comfort zone which very often leads to new exciting ideas and work. Most of my favorite guitars I have built have been heavily influenced by ideas from players I’ve worked closely with.

Thanks, Ted, for sharing your thoughts and enthusiasm for the custom guitar making process with us!

Reach out to learn more about the Bespoke process here at TNAG.