In this latest instalment of Meet Your Maker, Connoisseur talks to Northern Irish luthier, Ciaran McNally who, at only 30 years of age, is making some of the most desirable workhorse acoustic instruments available today.

Ciaran McNally is a revelation. Not only because he builds 40 guitars per year, single-handedly from his workshop in Armagh, Northern Ireland, but because he’s a breath of fresh air in the world of guitar makers. He speaks plainly and honestly—he’s unafraid to tell it like it is and he has a clear vision for his instruments that flirt with Celtic influences via the workhorse staples of American golden era acoustic guitars.

Sitting in his office, flanked by a sunburst OM, a dreadnought (“Shane Hennesy’s picking that one up”) and a jumbo hanging on the wall, his charm and energy are as infectious as his guitars.

“It's about 900 square foot here. And it's just me. I come in and ignore the world and make guitars, and it's complete and absolute bliss,” he laughs.
“I’m here in my office in the middle of the building, and then behind me is the main woodworking room, with machines,” he says gesturing around him. “Next door is the setup room. And then in the other side of the corridor, we've got a sanding room, polishing room, and a spray booth.”

In a turn of complete serendipity, we spoke to Ciaran on June 24, 2021, for this interview. And turns out that’s the date his first guitar shipped the year prior.
“I just had this idea that if I was ever going to do it, 30 would be a good point to say ‘Ok, I'm not going to make anyone else’s guitars. I'm just going to make my own now.’ But it was around this time last year I got the keys to this place after returning home from England working at Atkin Guitars, and the 24th was the date the first guitar went out of these doors… so in a year to date, I’ve made and sold 41 guitars from this place.”

And that’s no mean feat. Single-handedly producing 41 guitars of the highest quality in 12 months, working 70 hours a week to meet demand. Ciaran is self-effacing when we talk about his achievements.

“It’s funny, going into the pandemic we had no idea what would be in store for us guitar makers—I certainly don’t think we expected sales to be this high! But really, there wasn’t a better time for me to come back to Northern Ireland and set up my shop here and do it on my own. It’s worked out pretty well for me and there’s certainly nothing I can complain about! There hasn’t been a year since I was 16 or so that I’ve not made my own instruments.”

Ciaran isn’t afraid to say he uses machinery to build his guitars, despite its usage being unfavorable in some circles. But for him, he’s focused on the process of building the acoustic guitar as efficiently as possible.

“I do use C&C and laser, of course. I really didn’t want to outsource anything. I wanted to create my own product here, on my own, and not rely on outsourced operations to a certain extent. And looking back at the pandemic, that turned out to be the right decision. I do everything myself, right through to spraying and finishing. I’ve always been inclined to say that if it's got my name on it, I have to do as much of it as I possibly can. The fact that I do all my own machining and stuff in-house allows me to have a schedule that makes those kinds of numbers possible.”

“And having worked for guitar factories in the past, how I think about guitar making probably isn't the same as most ‘boutique’ luthiers, who'd go into maybe having trained with a single luthier, and maybe do a college course, and then just say, ‘Right, I've got a plane and a bandsaw, and I'm going to make guitars.’ That's a very different thing to what working for companies that make thousands per year teaches you. The fundamentals of craftsmanship don’t change, but the large companies teach you about processes and efficiency,” he says. 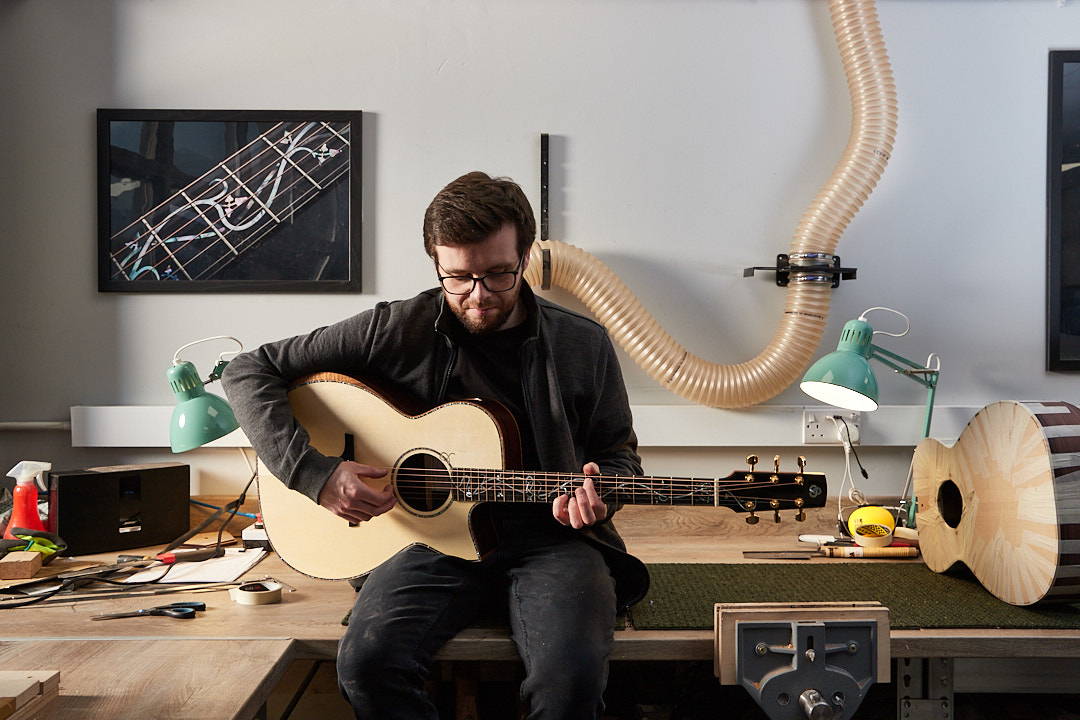 Start of the McNally journey
Much like other guitar makers, Ciaran cites his first guitar was made at the kitchen table, aged 16. But formal training came from a few notable places and brands. Firstly, McNally studied guitar making at the Logan Lutherie School in Belfast through intensive evening courses. Then came his trip to England, aged 18, to study for a diploma in Musical Instruments at the London Metropolitan University (you may know this as the former London College of Furniture).

“The college generally frustrated me,” Ciaran opens ups. Citing the pace at which they worked, you can understand that building one guitar per year, when compared to his 41 now, the course was unlikely to scratch his itch.
“There's a kind of attitude in guitar making among a certain type of luthier that this is a noble art, and therefore you'll never have a career, or you'll never really be able to live off making instruments. You'll have to do repairs, you'll have to have a side hustle. And they kind of taught us through that vein. One of the most frustrating things was that they had amazing equipment, but they wouldn't let us use any of it. We had to do everything by hand. And that’s fine. I am all for learning everything by hand, and I’m pleased that, at this stage, I have done everything by hand. But if this is a professional course teaching us how to be professionals, we need to know how to do it in the real world. And that's what started to frustrate me.”

With said itch still requiring a scratch, Ciaran would travel back to Belfast in the summers to the previous course, finding himself being taught more there than in London.

“The guy who ran that course in Belfast had worked for Lowden and Avalon, and he had more of a realistic mindset of, ‘Well, you can do that by hand, but realistically, if you're going to be a professional, you're going to have to learn how to do it with some machinery as well.’ And that was the mindset I was looking for and the mindset that was missing in London. So I actually left the course early in London."

“I’d gotten so many credits,” he laughs, “that they sent me a diploma in the post six months later. I just walked out one day, and I got this letter, thinking, ‘Oh, what’s this? They must be looking for money because of library fines or something.’ And it wasn't. It was a diploma. It's in a folder here somewhere. I should really put it up, right?”

Learning from Lowden
What works to Ciaran’s advantage is the experience of having been to two guitar making schools and then having worked for two well-known companies, garnering him an experience you can't buy—and one that can’t be taught in a school. Upon return to Northern Ireland, Ciaran started working for the renowned Celtic guitar maker, Lowden, as a senior craftsman.

“That was my first professional guitar making gig and seeing a production line of sorts. It's not a big factory, and it wasn’t then. It might be bigger now. But maybe 25 people working on the guitars, when I was there, at the height. And seeing that you could process the whole thing, and you could have a schedule, and in many ways, it made the quality better. This idea that somehow to produce guitars with machines would somehow lower the quality, it's really not true. If someone approaches the production line mentality with quality, you’ll get better. And that is absolutely the truth. And I would always say that a team of really good, focused guitar makers will make a guitar better than any of them could individually. Because they'll all be playing to each other’s strengths, and they'll all become experts in their own fields.”

“And that's what I saw at Lowden. You had somebody who just focused on 10% of the whole guitar. A complete and utter expert in it. The downside to that is, if you're in a busy environment, is that all you do? And if it’s all you do, do you become bored and does it become monotonous? And that did happen to me. Initially, I got to do a few different things, and that was very good experience. But I started to be boxed in and things just got a bit repetitive. And that's when I left, because I actually had this moment of thinking, ‘If I don't leave now, I'm going to not want to do anything with guitars ever again.’”

“Some people can go and work in those environments, and they're really pleased to be part of making a premium product as a team. And there are really positive moments in those things too. But it’s hard for someone who maybe wanted to be a guitar maker, because you get into it, you feel like you’re progressing, progressing, progressing, and then it plateaus, and it sort of drops off a cliff. Like anything, it depends on the type of person you are, but for me, it couldn't have been a long-term thing. The way it was set up, that it was a production line, and you did your part, and then you handed that to the next person, they did their part, and it moved through that process. That didn’t excite me.”

Form and function
It’s clear talking to Ciaran that building guitars as art or museum exhibits isn’t what excites him. It’s all about being connected to players, and balancing form and function. The term ‘workhorse’ is thrown around far too freely when looking for words to describe instruments, but in the case of McNally Guitars, that’s exactly what they are and what Ciaran builds.

Could he build a guitar decorated to rival Liberace’s palace? Of course. Does he want to? Not particularly. First and foremost, for Ciaran McNally, the guitar is a tool and it should excel as that.

“I’m not an artist. I don't generally think of guitar makers as artists. I think of them as problem solvers. Solving problems for musicians by making something that works for them and inspires them. Guitars are beautiful in their form, of course, but the thing that makes them most beautiful is their function, the fact that they make music. If people want a great guitar, I’m here. And if they want to customize it, I’m right here too—but as you might expect from me, I’ve got all my options planned and jigged for efficiency,” he says.

“Every now and again, I enjoy doing a special project and throwing my whole being at it and challenging myself. I don’t just come to work to punch the clock. I still want to be challenged, and I want to push myself to try new things. But I’d say the bread and butter for me is something more like a set model that allows people, who aren’t maybe in that really high-end world, to be interested and get a great handmade guitar,” he finishes.

Sold out
Find out more about this McNally Dreadnought