Eric Weigeshoff of Skytop Guitars is nearing the finish line on two new guitars: a Grand Auditorium in ancient kauri and Italian spruce, and a Grand Concert in quilted maple and Swiss alpine spruce!

In anticipation, we wanted to revisit a past review of his striking and instantly recognizable double soundport/no soundhole design, take a look at the latest build photos, and detail a little bit of why we're so excited for these two special guitars.

Offset soundholes, soundports, or no front-facing soundholes at all? If you’ve been following the modern boutique guitar world for a while, it might not be shocking to see these radical innovations anymore. Yet, they’re still not common. The small crowd of luthiers who opt for alternate soundhole/soundport design is clearly a progressive ‘what if?’ question-asking crowd. Dig through the websites of McPherson, Batson, Wilborn or others, and you’ll see elegantly laid out explanations of their features based on acoustic science. But of all those luthiers, the one who seems most focused on using that science to create a player-centric immersive experience is New York-based luthier Eric Weigeshoff of Skytop Guitars.

Science of the soundhole-free design

It’s easy to see why, once humans had a better understanding of acoustics, luthiers started rethinking the soundhole. The body of the guitar vibrates and amplifies a strum, and a soundhole is necessary to project that sound outward. But by placing it smack in the middle of the top, the vibration of the wood is interrupted. As fellow no top soundhole-luthier Cory Batson puts it, “I’d never cut a hole in my drum heads!”

There was also, of course, the desire by many players to better hear themselves, which led to the side soundport. But many players and listeners found that the addition of a soundport on an otherwise traditional guitar didn’t just boost the audibility for the player—the overall volume of the guitar increased, too. It’s similar to the way a liquid pours out of a closed container faster when there’s an additional hole that allows air in to fill the space the liquid leaves behind. 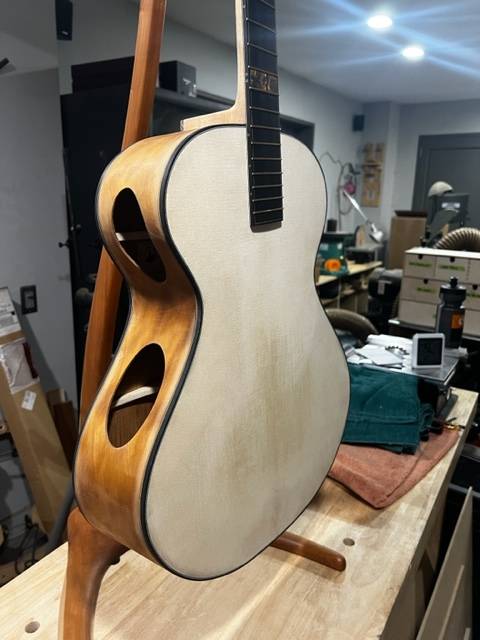 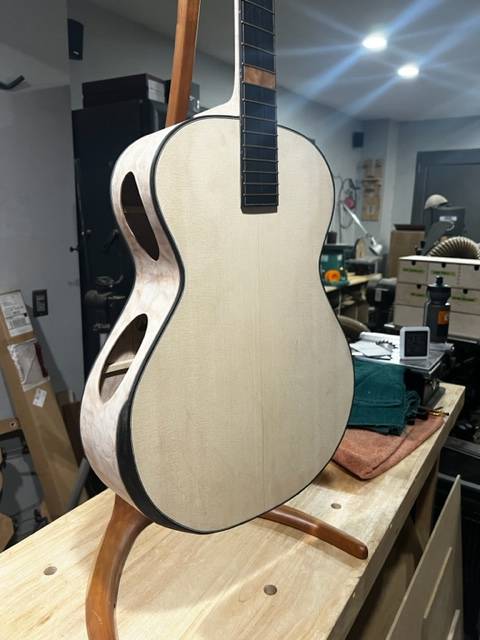 Eric Weigeshoff comes from a design background, so it seems fitting that he made his way into this innovative camp of builders and taken it a step further. In his aim to make “player-focused, intimate guitars”, Skytop guitars feature two upward-facing soundports, giving both that uninterrupted length of soundboard to vibrate freely, as well as the two-hole volume boost that comes with having an additional soundport. As Eric states: “The player is just ‘in it’.”

Taking away the front-facing soundhole also allows Eric to utilize a radial bracing system (something you’ll also noticed on Ben Wilborn’s Comma Series guitars). This unusual bicycle spoke-like design provides necessary support while allowing the top to move even more freely than it would on a standard X-braced guitar. 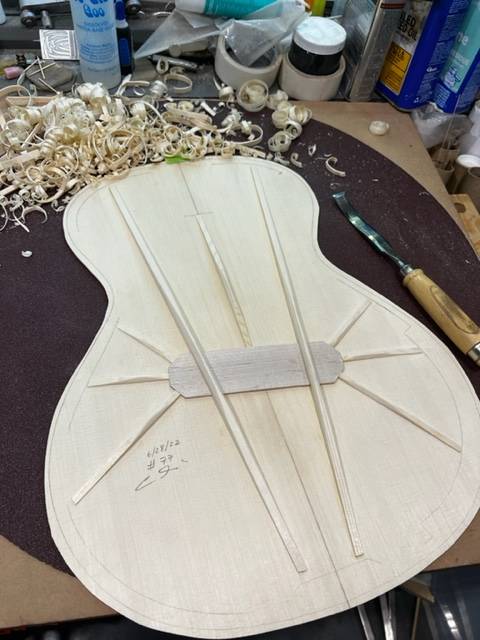 Eric’s guitars aren’t just defined by their soundports, though. The luthier is an avid rock-climber and loves exploring the beauties of the natural world, which he brings to his builds. He clearly gravitates towards tonewoods that have dramatic figuring and palpable texture, and he uses them in abundance. The body woods will be the first you notice, but quickly you’ll find unusual accent woods, as well. A dash of bright koa on an end graft, or some ripply walnut for the beveled armrest, are both color-coordinated and used to add visual interest, without the flash of something like abalone. The total result is a textural, earthy look and feel. There’s nothing that looks mass-manufactured about a Skytop guitar.

A flexible luthier who is happy to accommodate requests, Eric’s main focus is on three body shapes: his Modified Parlor (Mod-P), Grand Concert, and Grand Auditorium. The Grand Auditorium is the largest, but still stays firmly in the mid-sized guitar range at just 20” in body length, 16” in the lower bout, and with either a short 24.9” scale or multi-scale design. While one could certainly flatpick his guitars, he clearly designs with the fingerstylist in mind. And the adventurous player will find plenty of alternate tonewoods to choose from, either on a pre-existing Skytop guitar or with a custom order. From the familiar rosewoods and mahogany, to the offbeat flamed mango and myrtlewood—whatever a Skytop guitar is outfitted in, you can be sure it’ll look as good as it sounds. 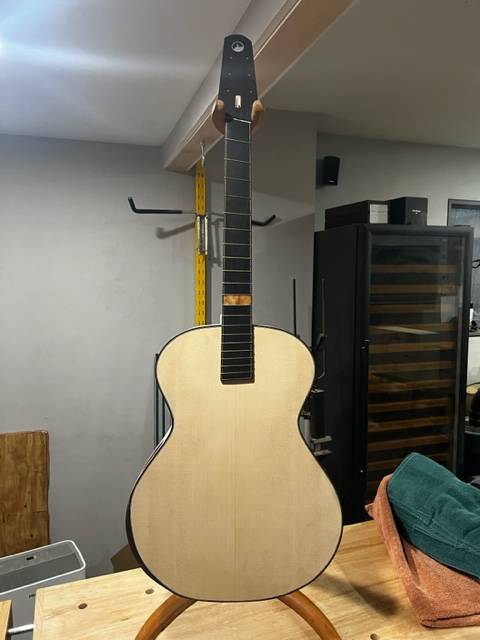 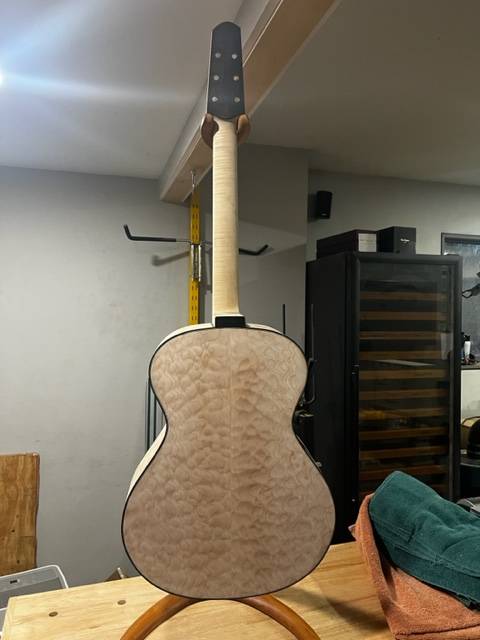 Swiss spruce is a favorite among countless luthiers, and Eric's use here on his GC design with gorgeously quilted maple is going to make for a sweet, articulate mid-sized guitar. 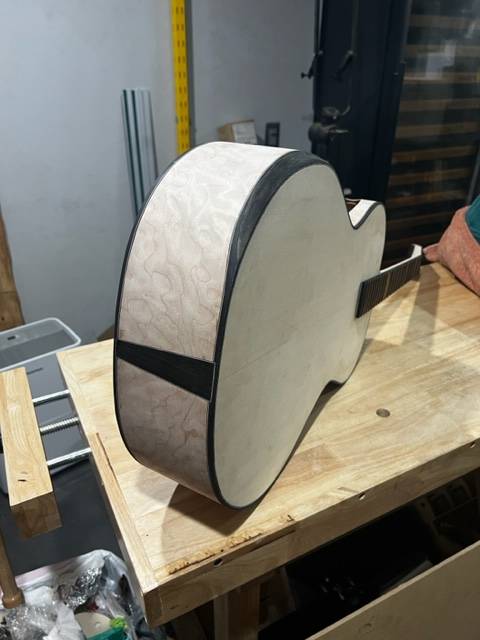 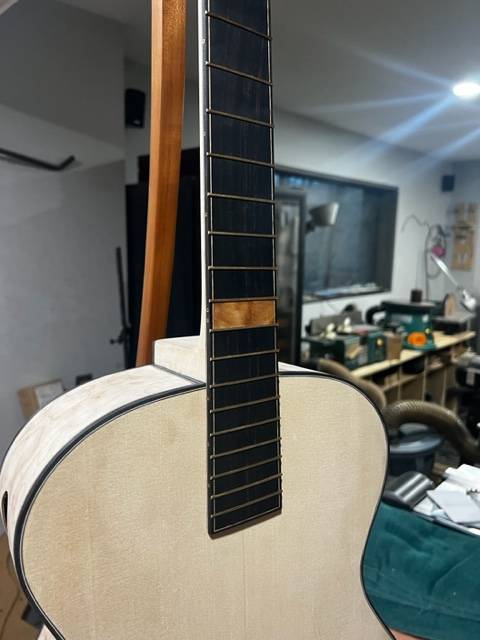 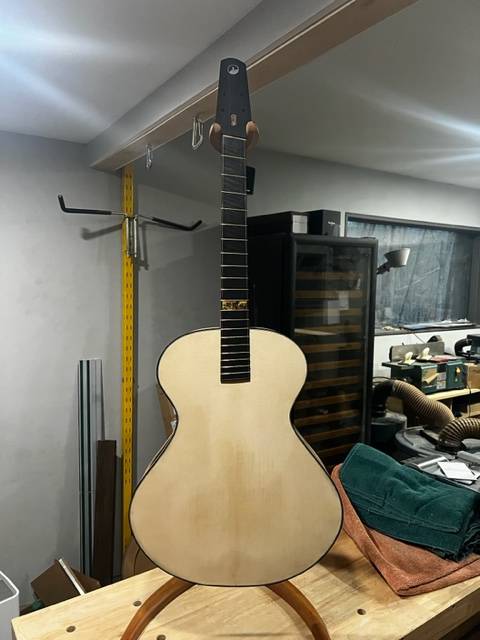 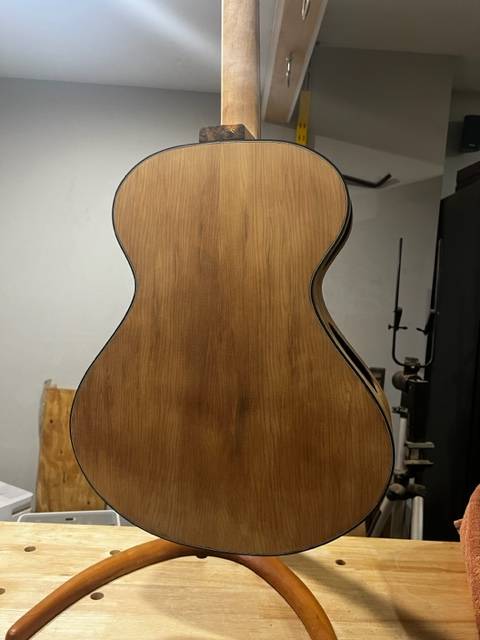 Among the European spruces, Italian gets its reputation for having a stiffer, brighter response. Combined with ancient 45,000-year-old New Zealand kauri, this wide-bodied GA is going to have a sparkling, resonant voice! 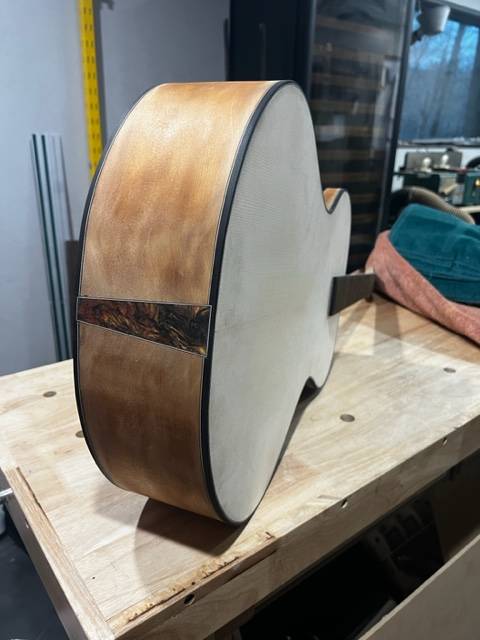 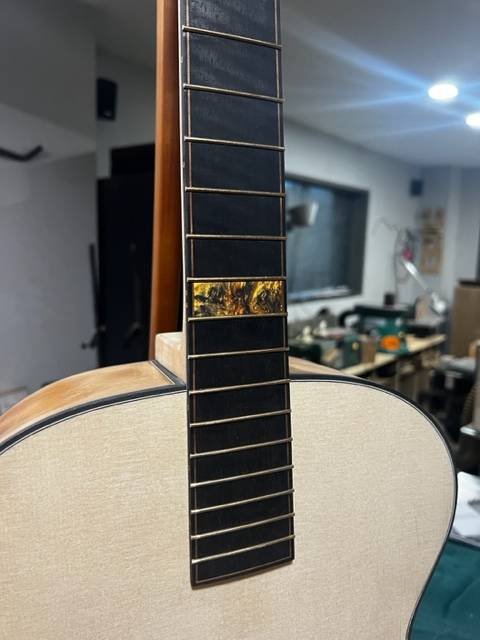 These guitars are available for pre-order, and both will go live on the new Carter Vintage Exchange when they are complete!