Coinciding with the one-year anniversary of Eddie Van Halen’s death, ERUPTION: Conversations with Eddie Van Halen is a major biography by two music journalists who knew him best.

Authors Brad Tolinski and Chris Gill share with fans, new and old alike, a candid, compulsively readable, and definitive oral history of the most influential rock guitarist since Jimi Hendrix. The book will be released on October 5, 2021, but is available for preorder now here.

When rock legend Eddie Van Halen died of cancer on October 6, 2020, the entire world seemed to stop and grieve. Since his band Van Halen burst onto the scene with their self-titled debut album in 1978, Eddie had been hailed as an icon not only to fans of rock music and heavy metal, but to performers across all genres and around the world. Van Halen’s debut sounded unlike anything that listeners had heard before and remains a quintessential rock album of the era. And they would end up as one of only five rock bands with two studio albums that have sold more than 10 million copies in the US.

ERUPTION: Conversations with Eddie Van Halen is based on more than 50+ hours of unreleased interviews Tolinski and Gill recorded with Eddie Van Halen over the years, most of them conducted at the legendary 5150 studios at his home in Los Angeles. The heart of ERUPTION is drawn from these intimate and wide-ranging talks, as well as conversations with family, friends, and colleagues, including other major guitarists like Tony Iommi (Black Sabbath), Steve Vai, and Steve Lukather (Toto, Michael Jackson, Ringo Starr, Elton John). 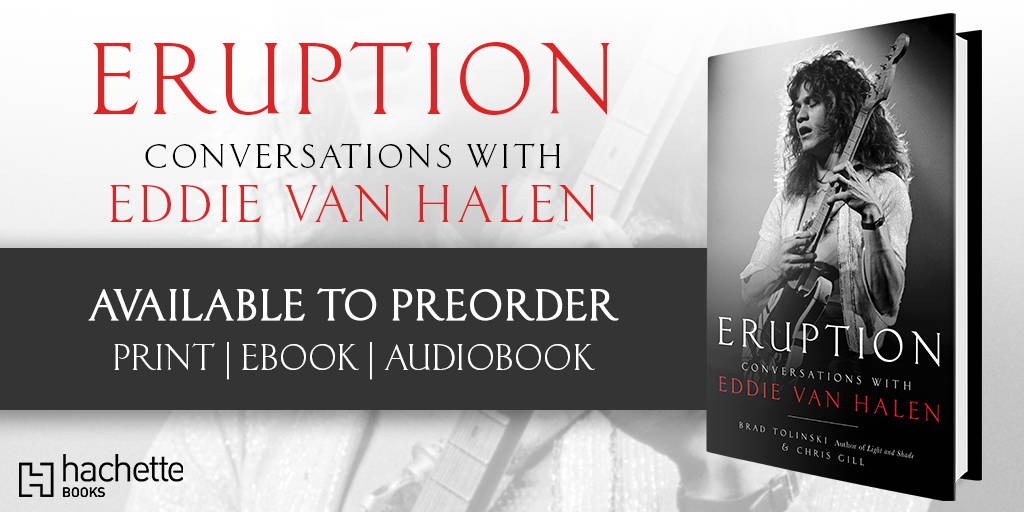 ERUPTION chronicles the highs and lows of this rock legend. In addition to discussing his greatest triumphs as a groundbreaking musician – including an unprecedented dive into Van Halen’s masterpiece 1984 and the story behind playing on Michael Jackson’s “Beat It” (which they did as a favor and never received a dime for) – the book takes an unflinching look at Eddie’s early struggles as a young Dutch immigrant unable to speak English, which resulted in lifelong issues with social anxiety and later problems with alcohol and cocaine.
It also examines his brilliance as an inventor who changed the face of guitar manufacturing.
The book also explores the details of his life, both personal and professional.
Unfortunately for Eddie and his legions of fans, he died before he was ever able to put his life down to paper in his own words, and much of his compelling backstory has remained elusive—until now.

As entertaining as it is revealing, ERUPTION is the closest readers will ever get to hearing Eddie’s side of the story when it comes to his extraordinary life.