This one guitar has quite the legacy and back story.

It starts, of course, with Martin. The first of their designs to really step away from classical guitar-inspired shapes and builds, the OM was debuted in 1929 for Perry Bechtel, a bandleader who was looking for something loud enough to replace the banjo. Though their other models were being adapted for steel strings, the guitar for Perry was the first to be designed with steel strings as the starting point, ultimately informing the bracing and construction. Martin foreman John Deichman started with the 000 body but gave it a slimmer 14-fret neck and a long scale length, making it the first 14-fret steel-string flattop ever made. These features would prove so popular that Martin would soon make 14-fret versions of many of their models, including the dreadnought which soon eclipsed the OM in popularity for players looking for a loud stage guitar.

Though it was discontinued just a few years later, the early OM proved popular among a subset of players. By the '70s and '80s, brute acoustic volume wasn't as much of a requirement due to amplification, and there was a wave of players, influenced in part by the folk revival of the previous decades, who desired a guitar with better balance and response to the lighter touch of the fingers. Chief among those players was Eric Schoenberg. 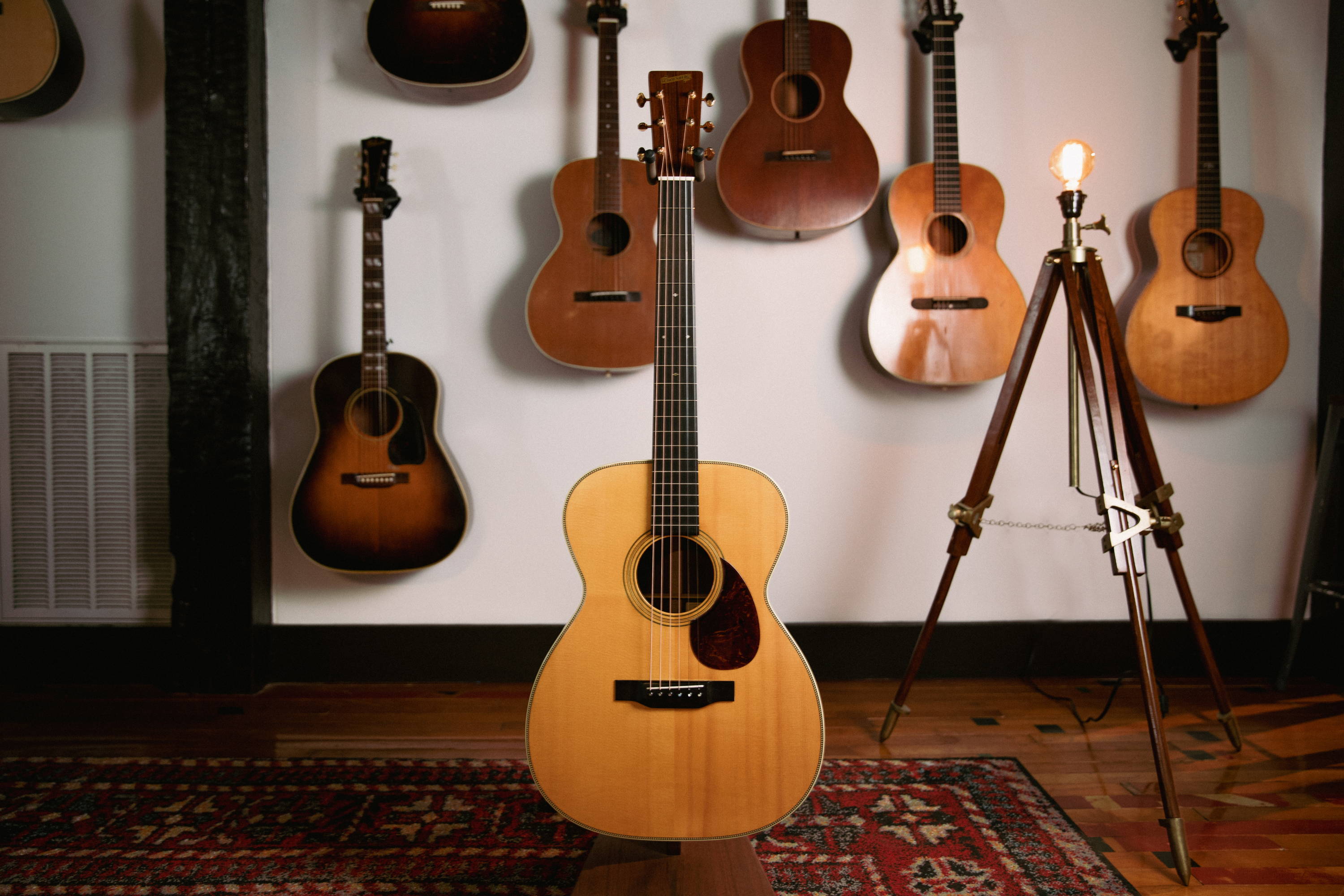 "As a professional fingerstyle guitarist Eric learned through experience that all guitars are not created equal. He discovered in the Sixties that the Martin Orchestra Model (OM), produced only from late 1929 through 1933, had qualities possessed by no other guitars. "The tonal wonder of the 1929-30 guitars to me is the explosive response, the full, complete tone from bare fingers. It's a magic thing, like the guitar is alive and kicking, giving back to the musician as much as he [or] she is putting in," he says. The balance, projection, and responsiveness of these guitars really stood out to him - and he heard something in these guitars that no one else did. Eric's strengths as a guitarist led him to these qualities in the first place - especially his superb touch and his near-obsession with creating great tone as he plays. The seeds were planted - Eric had found the archetype for the guitars that would follow - his guitars." 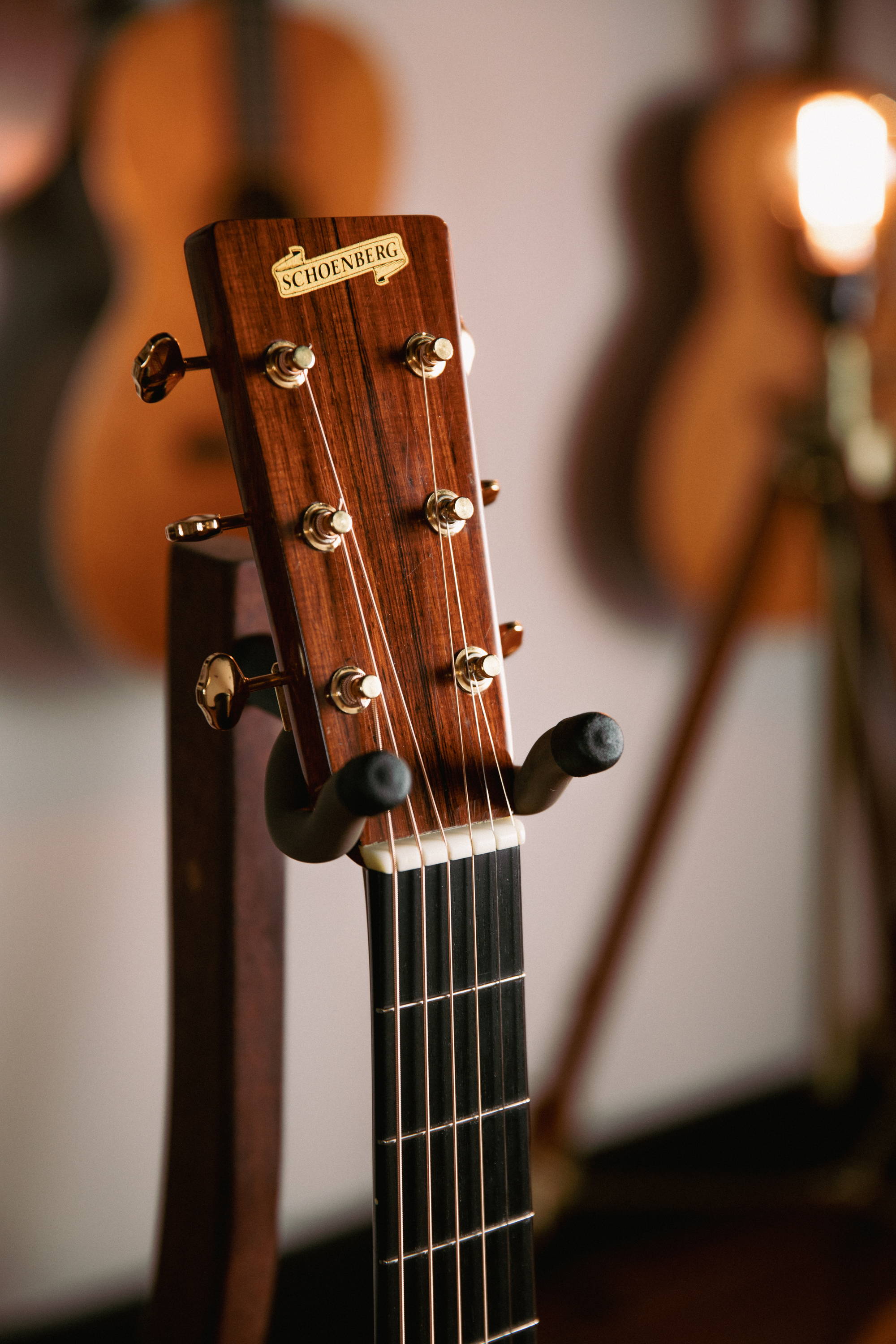 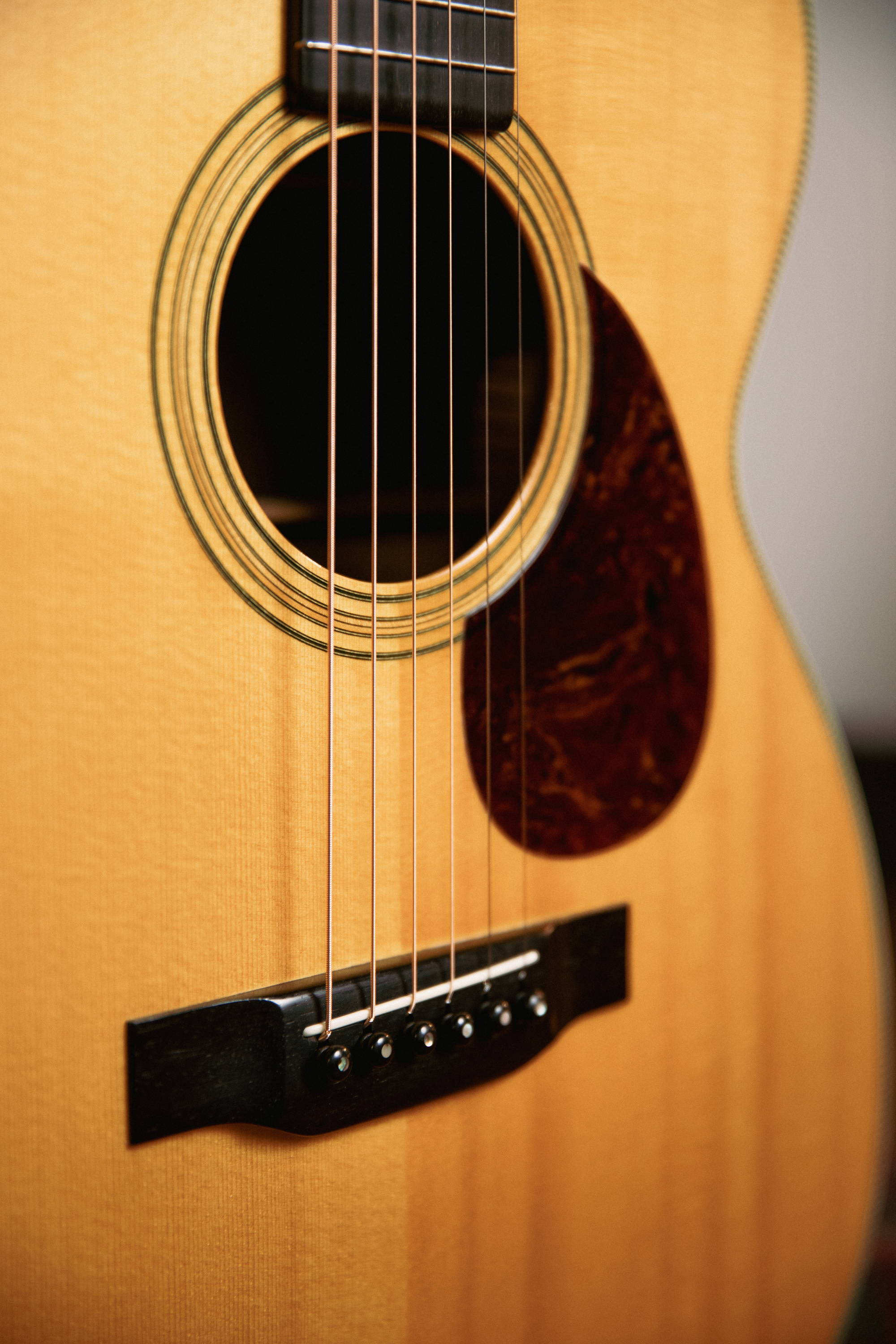 It was difficult to find those original OMs in good condition, so Eric persuaded Martin to make a batch of six in 1969 - the first they had made since 1933. Later on in 1977, he ordered another batch of special OM-45s through the Custom Shop that he sold through The Music Emporium in Cambridge, MA. During that same time, luthier Dana Bourgeois was working in-house doing repairs, often working on original OMs as well as the ones that Eric played in his own collection. It was then they started the collaboration that would lead to the Schoenberg Soloist, an OM with a cutaway. 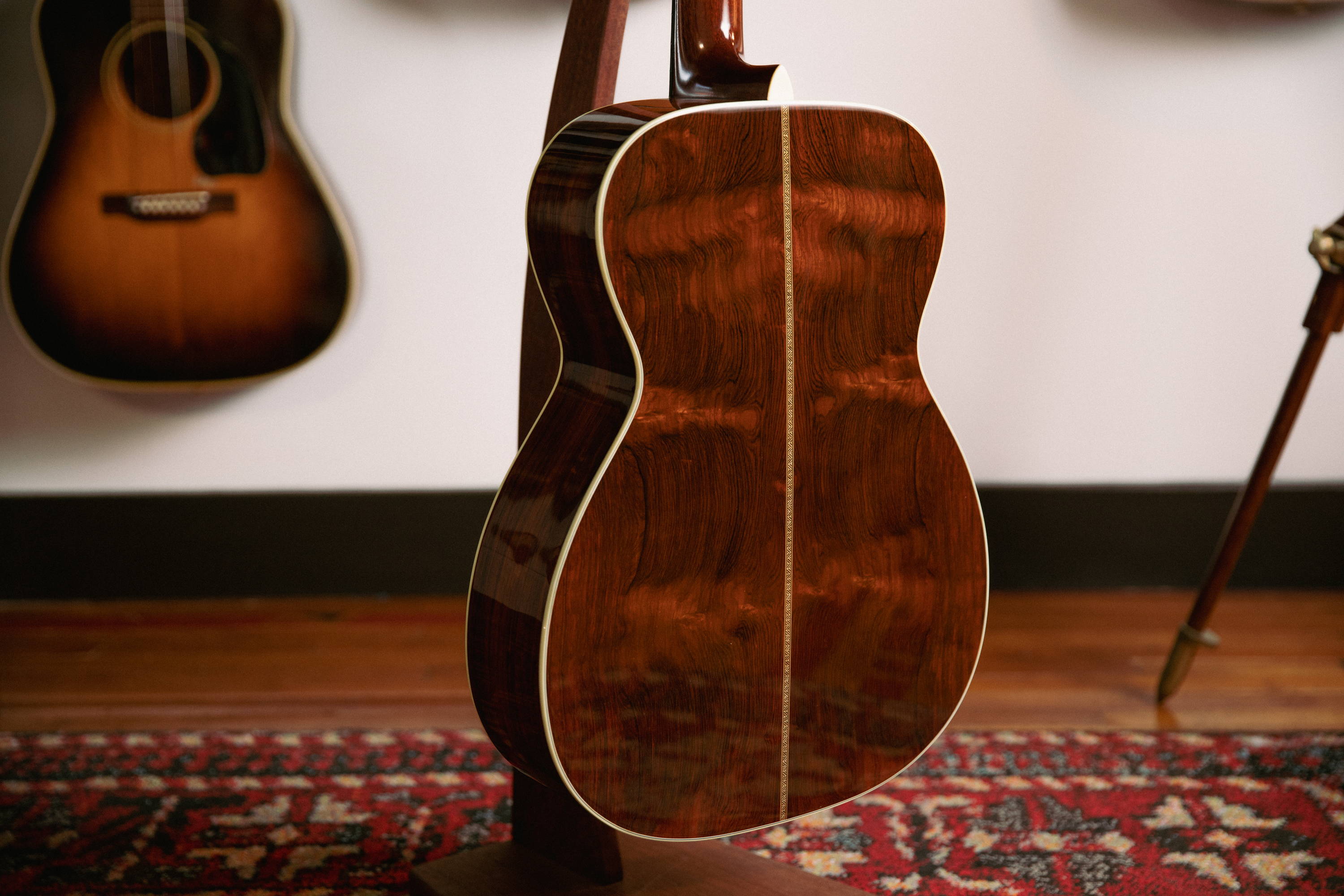 Again from Eric's site: "Eric would work with Dana to develop the specs. They would base much of this new guitar on a specific Martin OM from 1931, attempting to replicate the same neck shape, and the lightness of the bridge plate and bracing (Martin stopped using scalloped braces from 1944 through the mid-Seventies). They would attempt to voice this new guitar in a way that would improve upon the original by applying hand-building techniques to the original factory specs. This involved hand-splitting the braces and 'tap-tuning' the top, back and assembled box. Then they would add the cutaway."

The other bit to history to know is that, prior to the 1920s, it wasn't uncommon for Martin to manufacture guitars for other companies, who would then market them under their own names (Gibson also did this). During the Golden Era and through the folk revival they stopped this practice. But as David Gansz puts it, "Martin, facing declining sales during the decade of synthesized pop music (1980s), once again agreed to take on a project to build instruments under a name other than their own."

Dana and Eric took their prototype to Chris Martin, and the project was born. Dana would hand-voice the tops and fabricate the parts in Maine according to his and Eric's specifications, and then the kits would be sent to Martin's Nazareth, PA factory for assembly and finishing. Though the logo on the headstock is the Schoenberg banner, the guitars would bear the stamp of all three: a plate on the neck block with a Martin serial number, and a label hand-signed by both Dana and Eric. 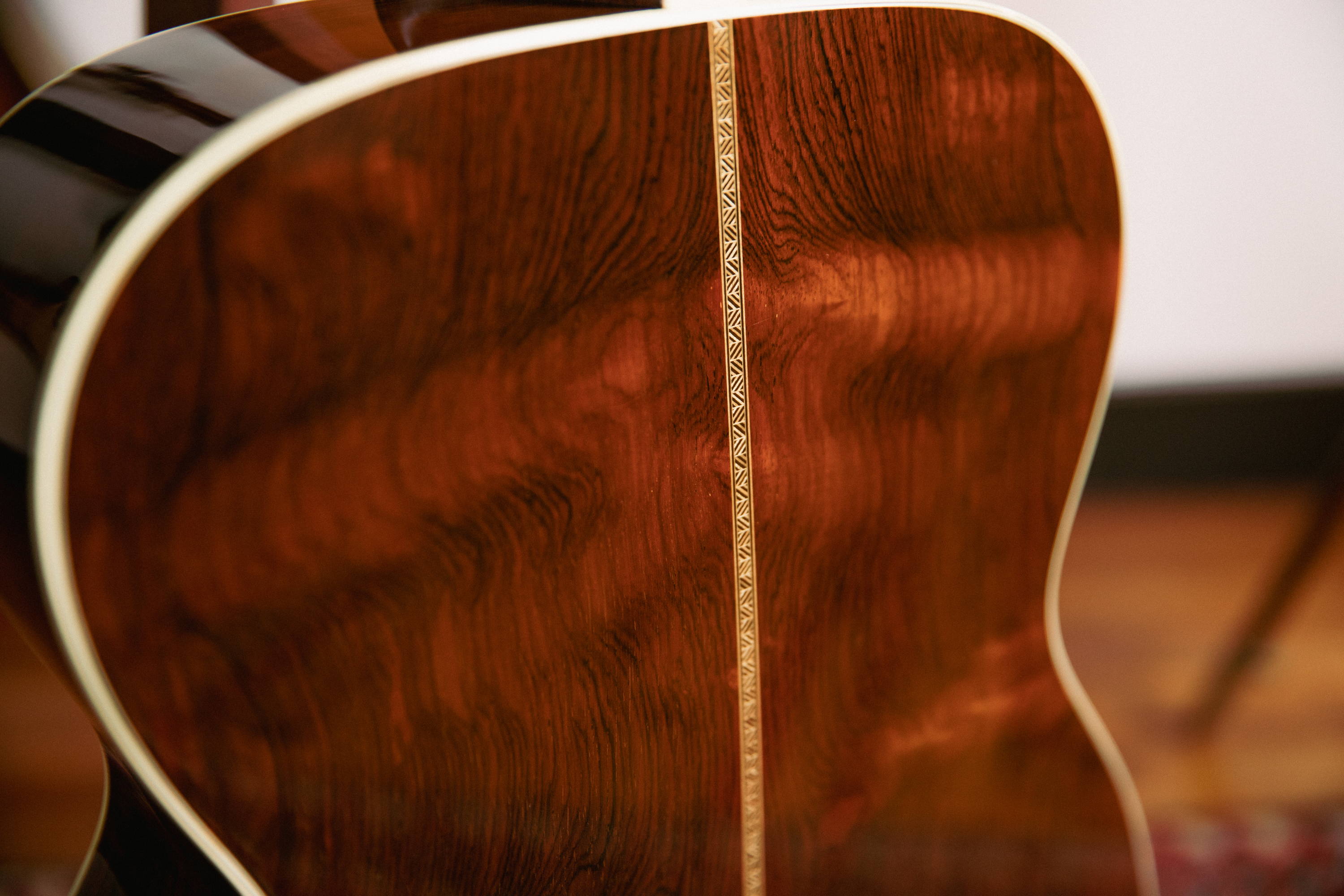 Dana and various assistants would make some 150 guitars in this manner, primarily in Brazilian rosewood sourced from Dick Boak at Martin, with varying spruce tops. Many were made with the Venetian cutaway, true to Eric's Soloist concept, but many were also made without, like this one. Around 1990, Dana's former apprentice, TJ Thompson, would take the project over. Once it was fully in TJ's hands, the guitars would no longer feature a hand-signed label on the inside, but a stamp instead.

But the transition batch, which this guitar comes from, bears a unique combination: it has the Martin placard on the neck heel, Dana and Eric's hand-signed label, and TJ Thompson's signature on the inside of the top. As TJ told us, this indicates that he built the top completely in his own shop using hide glue before overnighting it to Martin for completion. 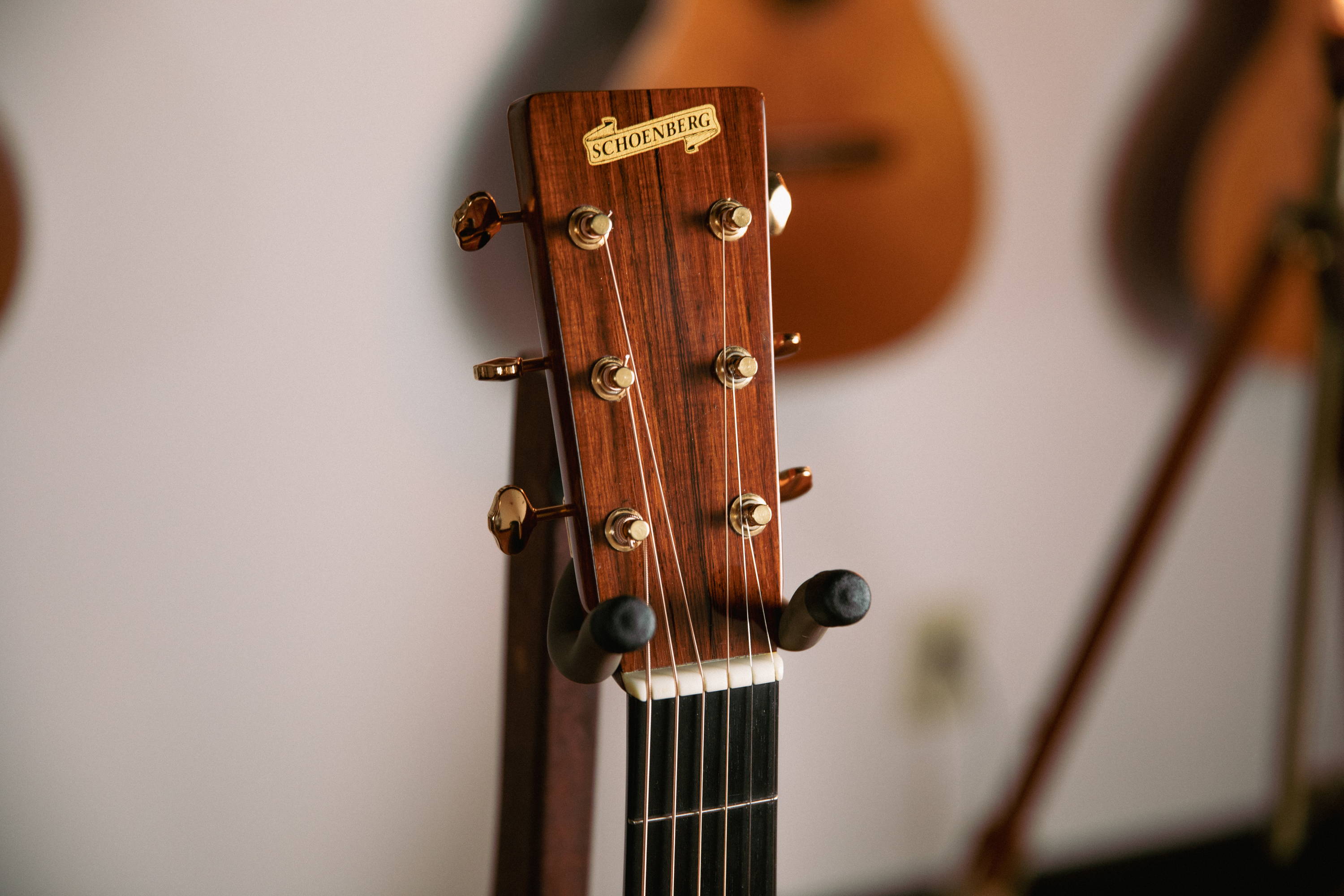 At the end of the day, this is just a fabulous Brazilian rosewood OM, and that's no surprise. With materials specially selected and voiced by Dana, hand-constructed by TJ, finished by the legendary Martin Custom Shop Team, and approved by Eric, there was no way this guitar could be anything less than great.