Just in from Circa, Greenfield, Martin and Fibonacci Guitars!

In recent days we've had some sensational new arrivals from some of the biggest names in the guitar world.

The Exchange has seen the arrival of a stunning Martin 1945 D-28, as well as TNAG's first Dreadnought from John Slobod of Circa Guitars. We've also glad received a stunning Greenfield GF in the Gallery, featuring Sapele for the back & sides and Alpine moon Spruce for the top.

While the sweeter sounding dreadnoughts of the 1930s may have been the start of Martin’s golden age, it is the 1940s that are responsible for their instruments of pure power. This prime example master craftsmanship is perfectly preserved and has a voice that could command other instruments to stand down. In fact, we would wager that this very instrument could be the inspiration for the phrase “Banjo Killer”. The set-up is as a new guitar fresh off the bench, and is living proof that Martin didn’t need fancy machines to make an extremely satisfying playing experience. A recent neck reset along with a replacement bridge and an expertly repaired back crack are the only maintenance this guitars has ever needed and there is no reason to think it shouldn’t stay in its current condition for decades to come. This might very well be the best sounding 1940s Martin we have ever played, and it would be the perfect investment for a player or collector alike. 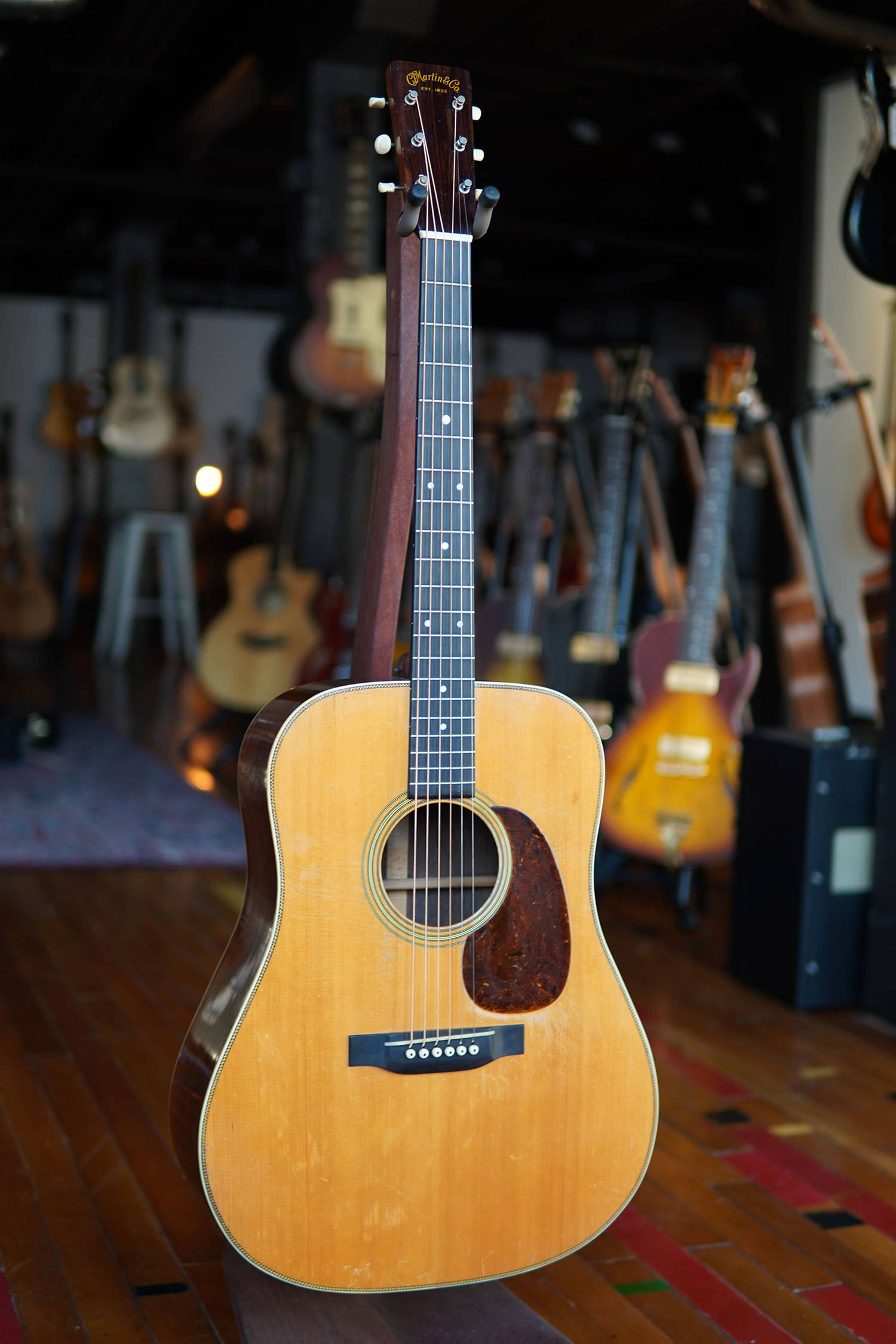 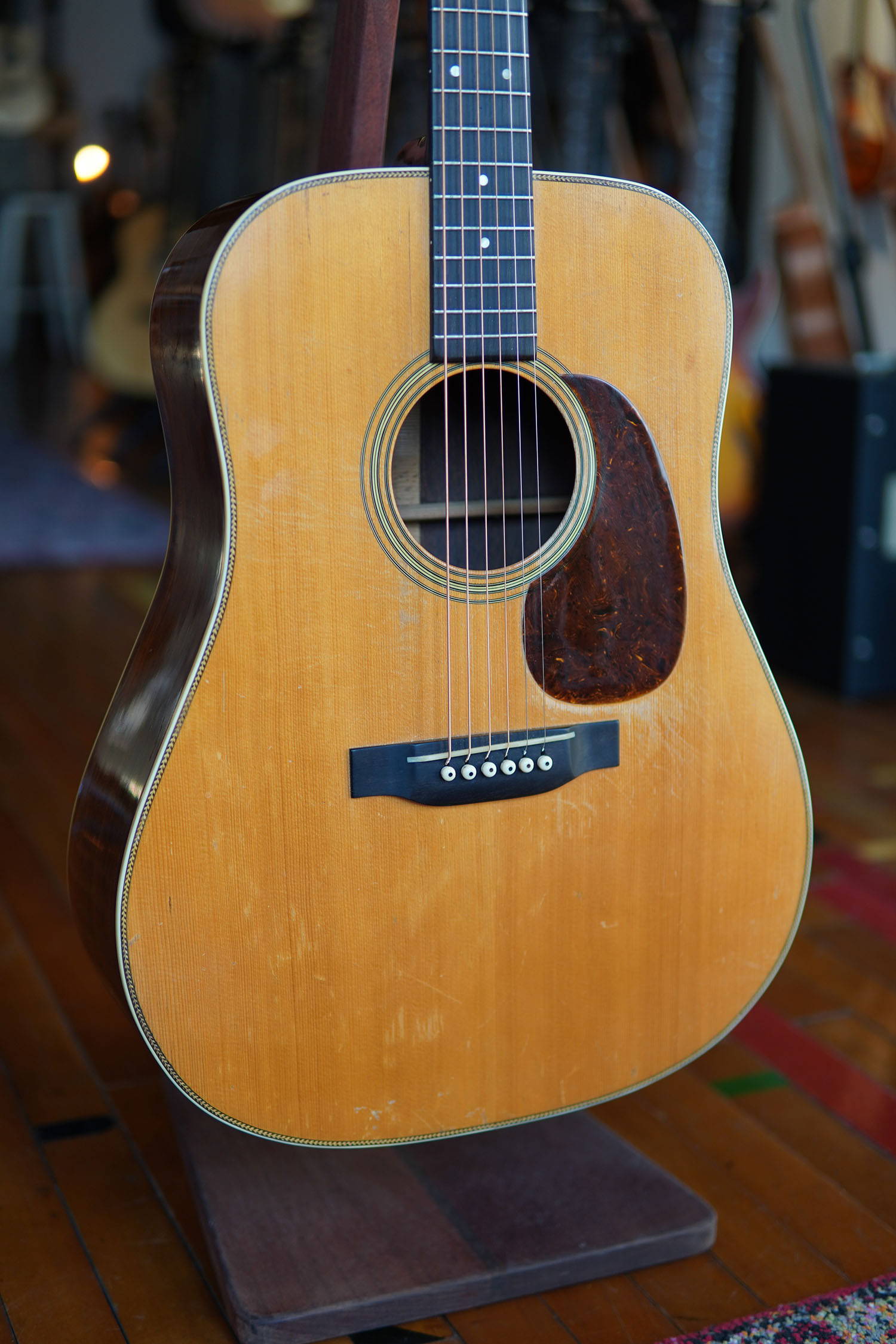 If you are convinced that bear-hugging a behemoth archtop is the only way to achieve round, warm bebop tone, let us introduce you to the Fibonacci Martin Taylor Joya Signature. This compact jazz box turns the genre on its head by sporting orchestral inspired trimmings like a dark violin stain and a cello inspired tailpiece. The tonal palette is wide, but never unwieldy, and although designed to be plugged in, it is sweet and full when played acoustic. The overall condition is excellent with almost no distinguishable signs of wear, and the action is low making complex chording a breeze. While no instrument can make you play like Martin Taylor, this beautiful heirloom quality archtop will make the journey easier, and it will do it in style. 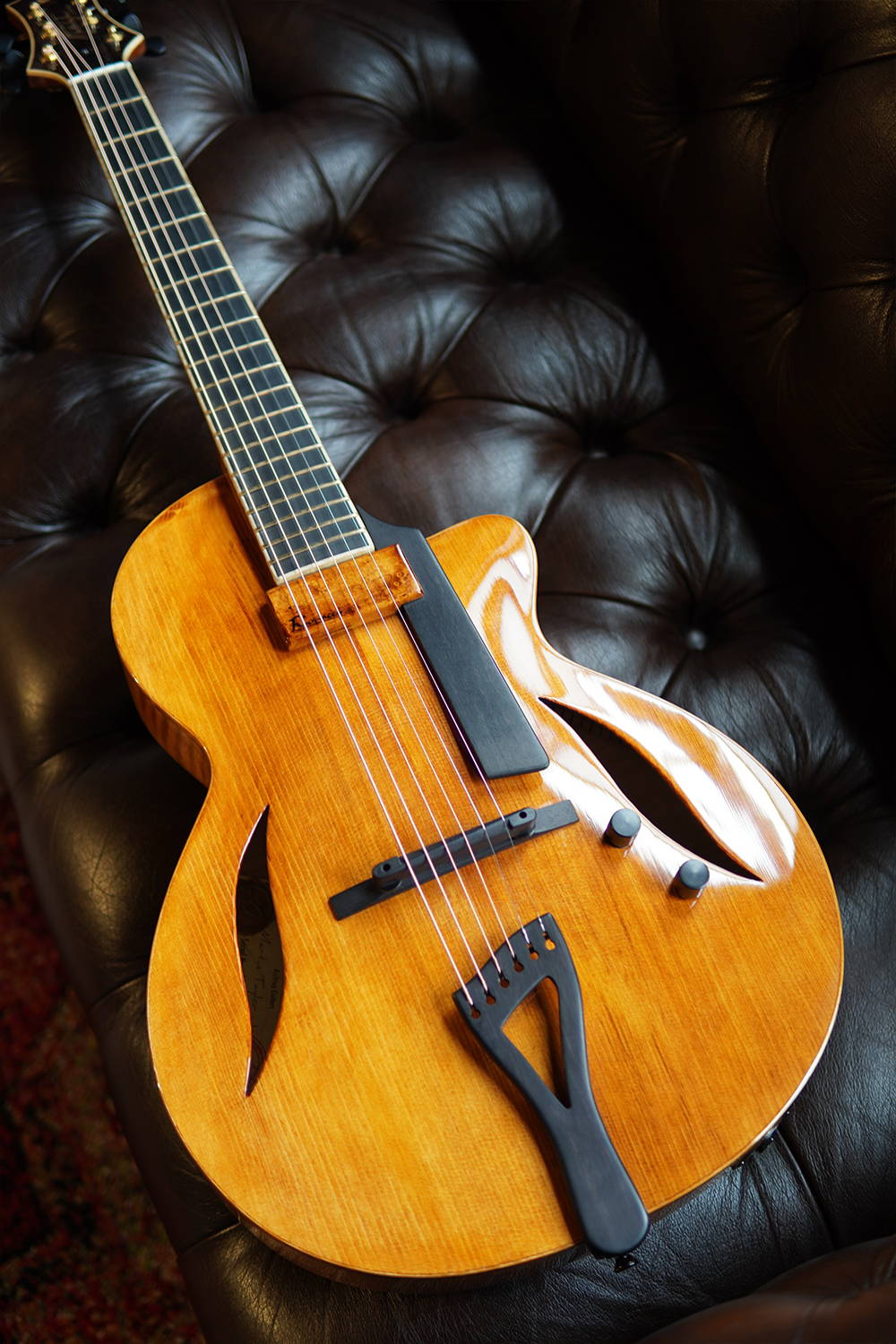 Michael Greenfield's exquisitely crafted guitars have ended up in the hands of players like Andy McKee, and it's not hard to see why. With a full scale length, and a body size slightly larger than a standard OM, Michael describes the GF model as "the essential Greenfield guitar". It's capable of tackling just about anything, but notably delightful as a fingerstyle soloist's instrument.

Alpine spruce, harvested at a time during the lunar cycle when sap is low, forms the soundboard, while a set delicately figured sapele forms the back and sides. Fans of mahogany would do well to consider this less common tonewood. Noted for having a warmth and midrange focus like mahogany's, many players find it has a boost of treble clarity and sparkle. For fingerstyle players, there is delectable note separation and bell-like sustain, and for strummers, a nice crisp attack and big, open sound. 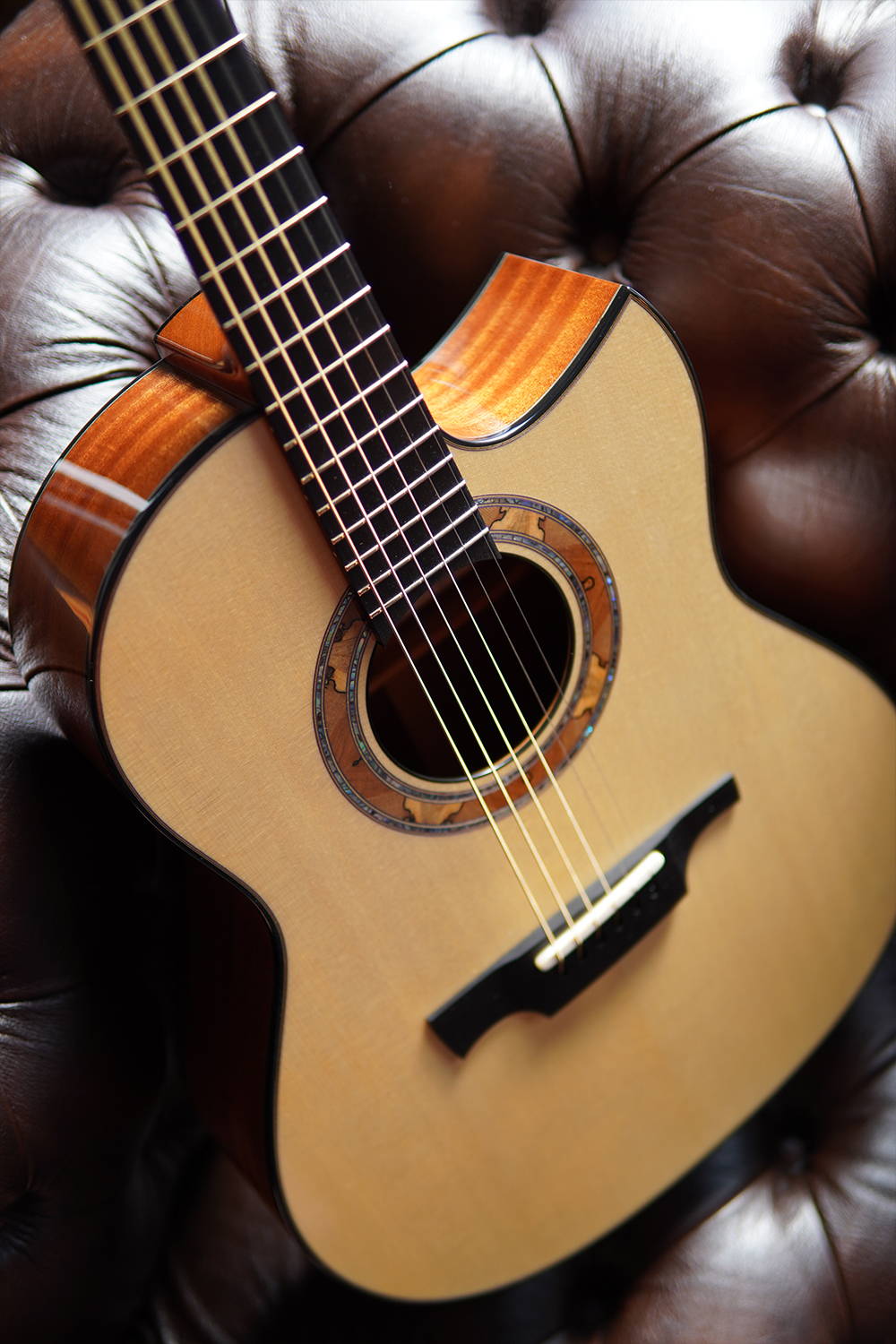 We are excited to feature the very first Circa dreadnought we've ever had in the shop (and fans of John Slobod's work will know that his guitars, in any size, are hard to come by!). John's early career saw him working for Dana Bourgeois and later with Eric Schoenberg and Julius Borges. With credentials like those, it's no surprise that the luthier's vintage-inspired guitars are so in demand. This Brazilian rosewood D-28 is an excellent replica of the 1930s Martins that inspired it. With a powerful bass and crisp, singing trebles, there's no doubt that this guitar can drive a jam. But it also has a complexity and nuance that rewards other playing styles and genres, too. The condition and set-up are excellent. 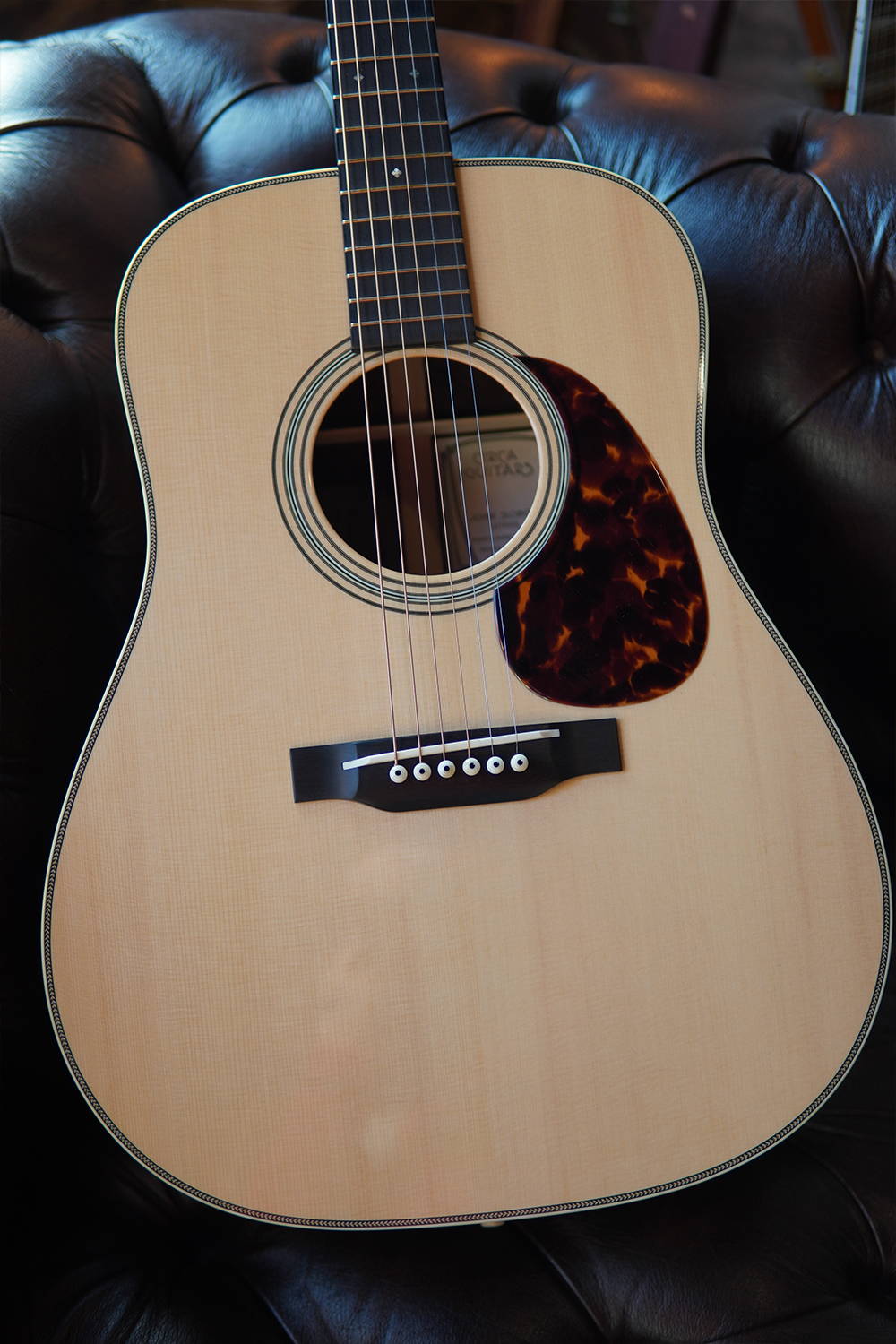