We're revisiting and updating a recent Connoisseur article today and putting the spotlight on a selection of vintage 000s over at Carter Vintage!

When it comes to highly coveted vintage guitars, the dreadnought is the king. I may not be much of a flatpicker, but even I won’t dispute that a well-preserved D-28 is basically the Platonic ideal of what a guitar should and can be. It even has a nickname: “Old Bone”. If you love flatpicking, you know to search out those 1930s dreadnoughts. But for those of us who prefer mid-sized guitars and are looking for a fundamentally different playing experience in terms of response and tone, the vintage market doesn’t seem to offer up as clear an “ideal” instrument. In the diverse world of solo vocal accompaniment, songwriting, and fingerstyle, there just isn’t a set of unofficially codified standards the way there is for dreadnought-playing flatpickers. (You could even argue that the best fingerstyle guitars, the ones that were purpose-designed, for the most part aren’t old enough to be considered vintage yet.)

When it comes to vintage Martins, though, there’s still a world of guitars to explore, and fortunately for us, their price points are typically much lower than the dreads. We’ve had an interesting selection of 000s in the shop in recent months, ranging from 1940-1962, giving me the opportunity not only to play them and hear the differences, but to learn more about Martin’s changes in those decades. Let’s jump in and discuss the world of 000s and OMs.

For many, the quintessential mid-sized guitar is the OM, which did have its first run starting in 1929. Taking the body dimensions of the 000—15” across the lower bout, 4” deep—the OM was the first 14-fret, standard 25.4” scale guitar Martin made, designed to be a loud replacement for the banjo in band settings. Of course, the even louder dreadnought quickly eclipsed it, and by 1933 the OM was discontinued. Even during that time of production, Martin made relatively few compared to the number of dreadnoughts they would make in later years. As a result, we see far fewer pre-war OMs than dreadnoughts. But because of their timing, they do have all those coveted pre-war traits, in addition to the punchier standard scale and the balance and focus of the 000 body: forward-shifted scalloped bracing, Adirondack spruce tops, and Brazilian rosewood in the case of the 28s. The best ones have a warm, pronounced bass, are light as a feather, and are lightning fast to respond. While pristine pre-war dreads still fetch the highest prices, 000s and OMs even into the later '40s are starting to hit lofty heights, too (especially if you make it an ultra-rare shade top). 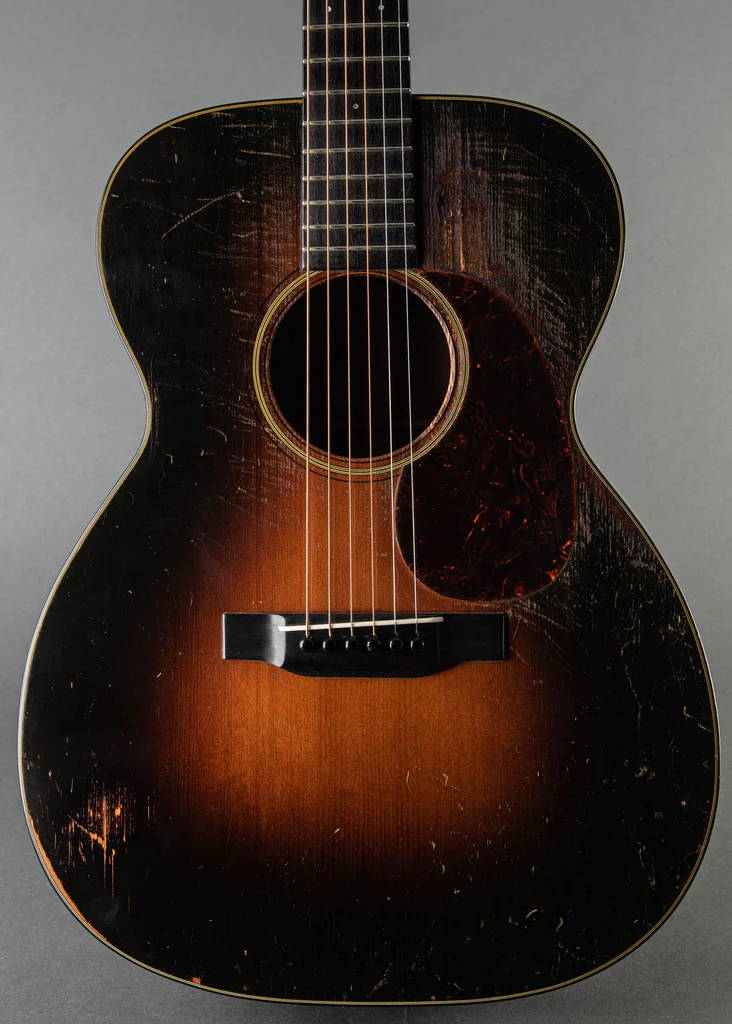 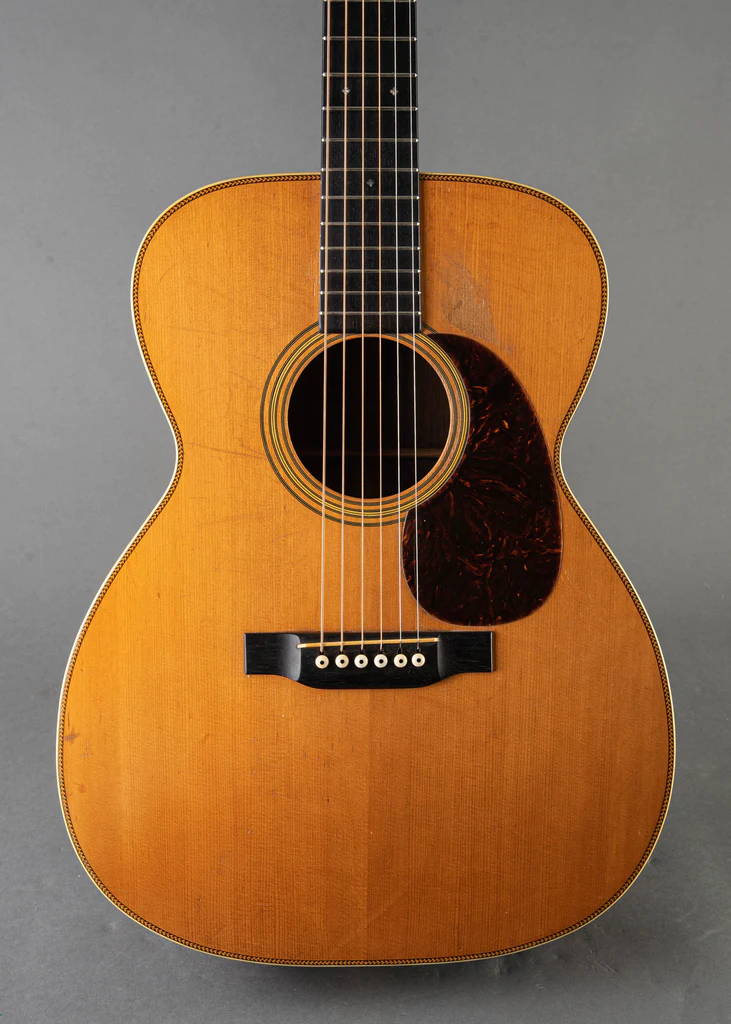 The distinction between 000s and OMs can be a little fuzzy these days. Initially Martin’s 000s were short scale 12-fretters, but with the popularity of the 14-fret OM and dreadnought, Martin started making their 000s 14-fret as well, just with a short scale. This iteration of the 000 continues in the Martin line to this day, which means that if you love that combo of features, you have decades of vintage guitars to wade through. (Other luthiers have distinguished their OM as 14-fret and 000 as 12-fret, with short and long scale variations of both, but again, I digress. And we’ll skip the 12- vs 14-fret conversation today altogether!)

Now that we’ve clearly defined the Martin 000, like I did with the dreadnought in last issue’s article, we can look at how Martin’s build techniques changed over the war years and again in the 1960s, and what effects those had on tone. The first was the move from forward-shifted X-bracing to rear-shifted right around the start of the war (for the US). The scalloping of the bracing to “maximize top vibration” was done away with in 1944. Around the same time, they also made the switch from Adirondack to Sitka spruce for the tops. It’s important to emphasize the phrase “transition year” here—you’ll see a mix of Adi and Sitka, scalloped and non on guitars made in 1944. 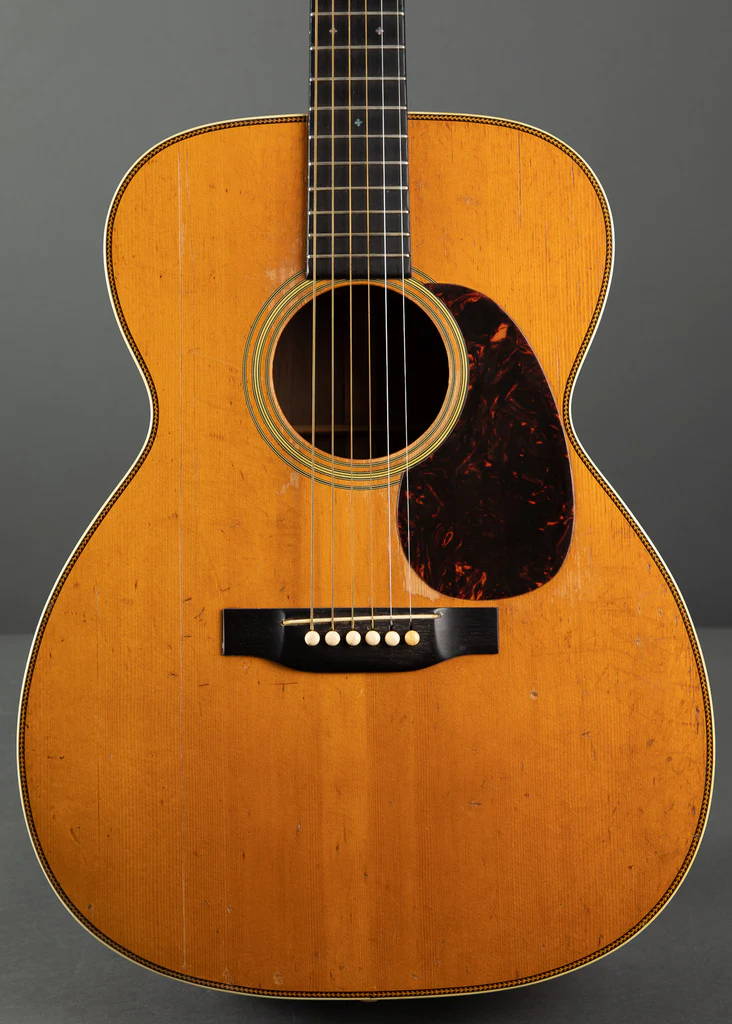 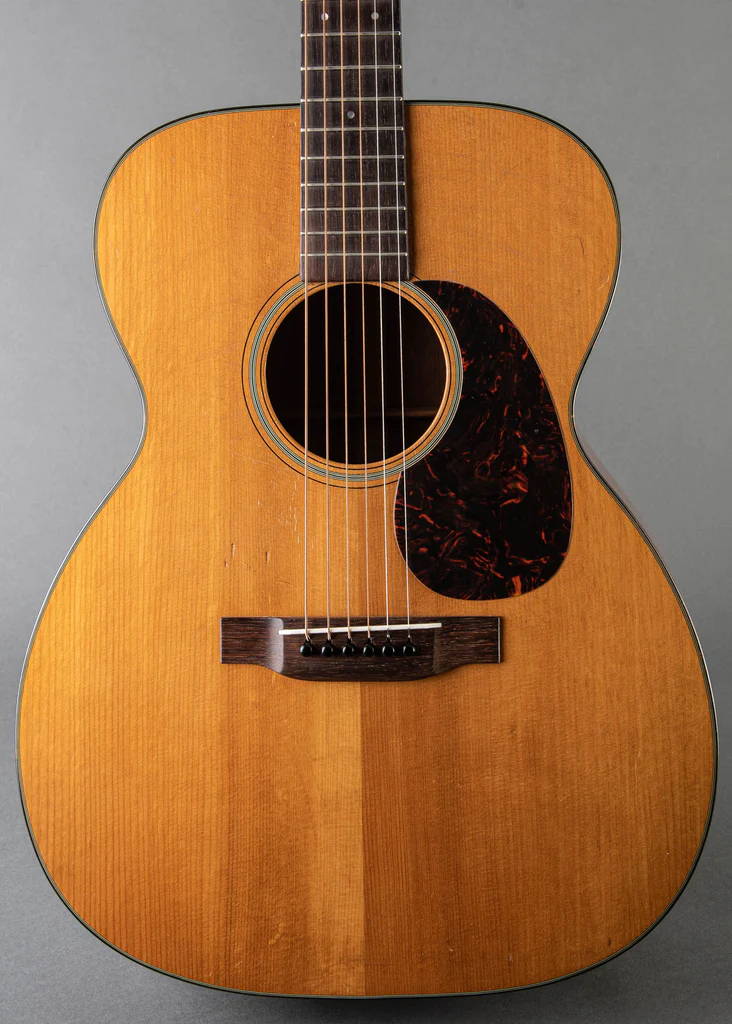 By 1945 Martin settled into a consistent set of build specs for the next two decades or so. Sitka spruce tops with rear-shifted non-scalloped bracing (which again, has advantages to some players for providing clarity and punch). Also consistent throughout this timeframe is their use of hide glue and a smaller bridgeplate, contributing to the overall responsiveness and volume of the top. Brazilian rosewood continued to be the standard on 28-style guitars until 1969, and it was often used as the bridge and fretboard material on many of the 18-style guitars, as well. While they might not have all the “best” traits of the pre-wars, these post-war guitars still have a lot of what matters most to players, especially those who plan to put a guitar through its paces, playing hard and traveling between different climates. The price point of 000s made after 1945 vs those made before is huge, too, with pre- or early war guitars cost three to five times as much. Post 1945s are, while not cheap by any stretch, potential entry points into the vintage market for many people, which is attractive. 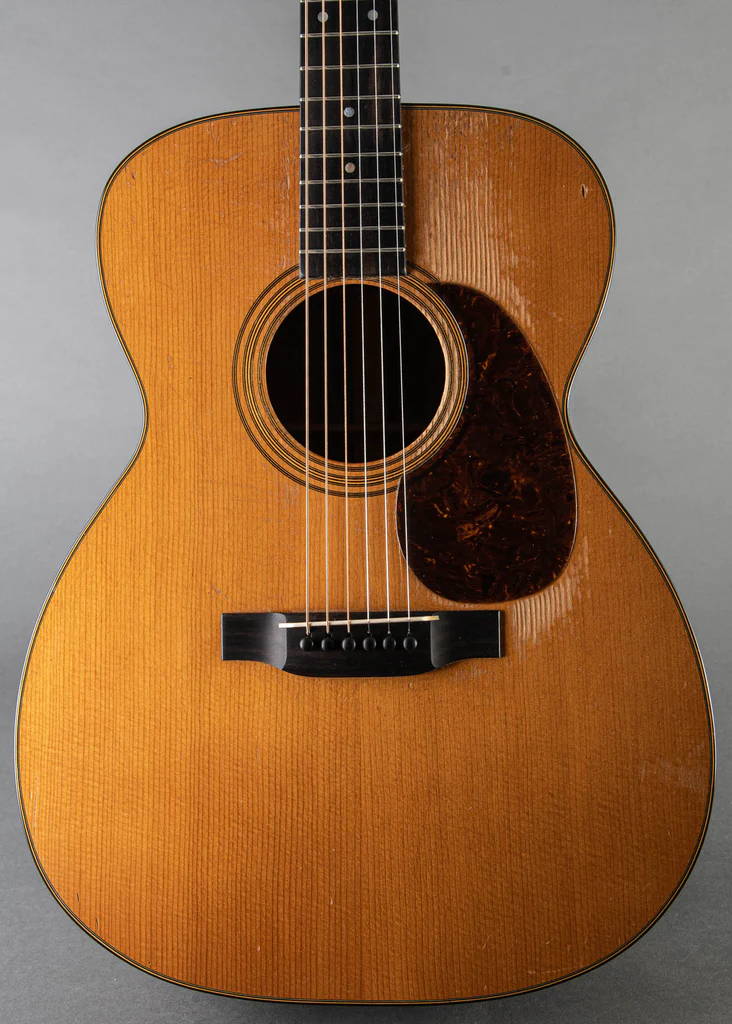 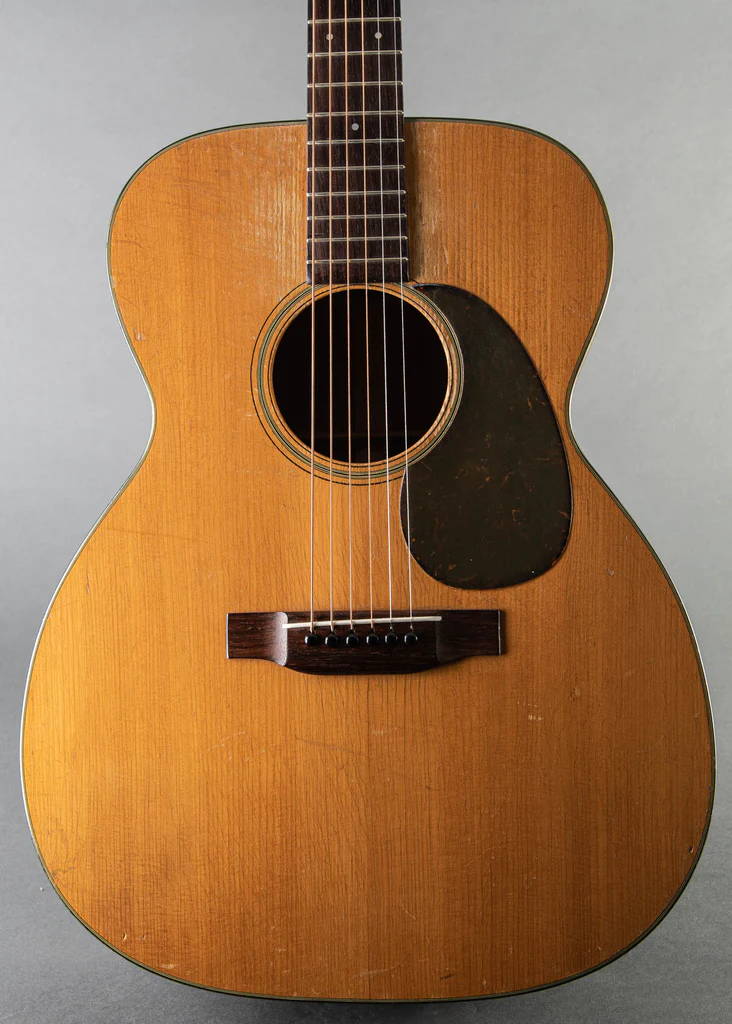 Earlier this year, we had 1949, 1955 and 1962 000-18s in stock, and I was hard-pressed to pick a favorite. All were well-maintained, and each one had that clean, woody mahogany tone that made me understand what Julian Lage meant when he called his Collings OM1A “honest”. I think I eventually settled on the 1955 as my favorite for some ineffable reason, and I would sooner attribute the distinction to that guitar’s unique life experience rather than anything the Martin factory was doing that particular year.

The thing to remember, too, is that prior to the folk revival of the 1960s and 1970s, and the dominance of guitar-driven rock in the same time frame, guitars weren’t really that popular yet. While Martin was a factory, their production levels weren’t huge yet, so individual guitars still received a lot of attention, and corners weren’t being cut yet for the sake of keeping up with demand. By the mid-1960s is when that started to change. But guitars built in 1962 have more in common with those built in the late ‘40s and ‘50s, so this 1962 000-18 stands toe to toe with the 1949 and 1955.

Their first foray into the nylon string market, Martin’s 1962 000-28c returns to the 12-fret design and features Brazilian rosewood back and sides. It’s hard to imagine a factory made classical like this with BRW today! 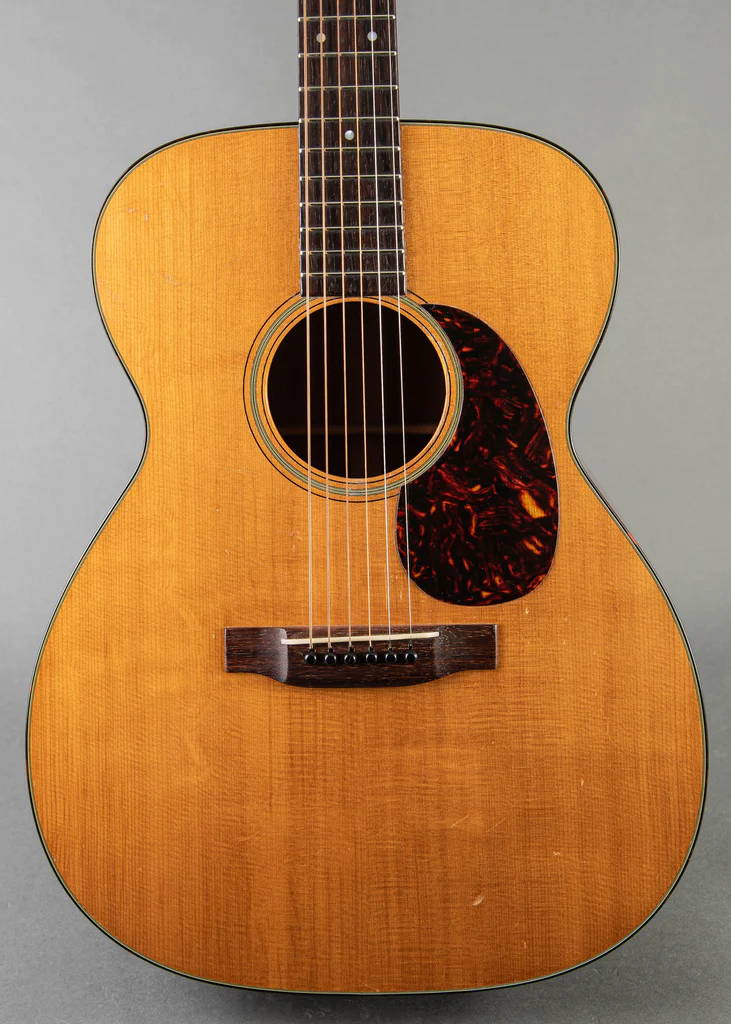 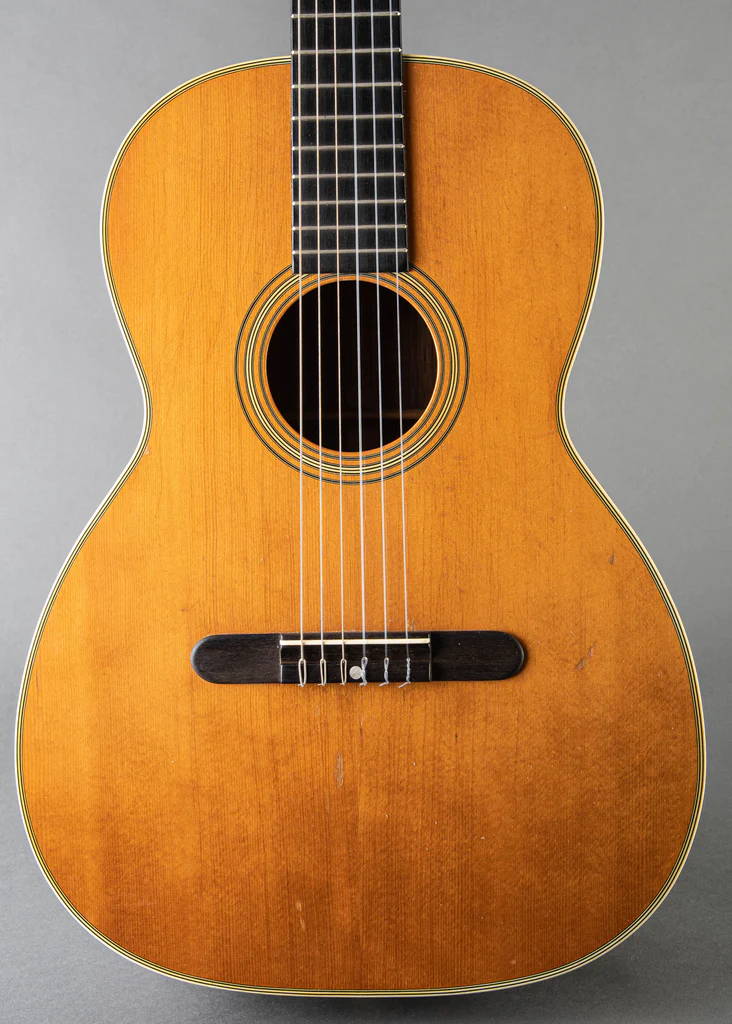 The biggest difference I find between pre-war 000s and the post-war to folk revival era 000s is that with the pre-wars, the line between mahogany and rosewood is harder to distinguish, and I think that’s an unequivocally good thing. In his interview on Michael Bashkin’s Luthier on Luthier podcast, John Slobod of Circa Guitars talked about this; the wood they were choosing and how they were using it was just different back then. If you can afford the price tag it takes to attain it, I get it. With the post-war 000s, I feel that the mahogany sounds like what I think mahogany is supposed to sound like, and the rosewood “sounds like rosewood”. Maybe it’s not as ideal, but they’re still fabulous guitars that have benefitted from the wonder of time, with crystallized wood fibers and cured finishes. Don't overlook them just because they came about a little later.

Conversation with Laurence Juber on Venturing into DADGAD