From his workshop in Cape Town, South Africa, Theunis Fick is fresh building guitars from the Galloup School of Guitar Building in Michigan, USA, as well as an apprenticeship with Casimi Guitars. TNAG Connoisseur chats to Theunis ahead of receiving his first builds into The North American Guitar.

Theunis Fick is considered and orderly. He’s not the guy who's going to jump to rash decisions and conclusions, but one who’s going to study the route and apply logic and reasoning before he gets there. He’s relatively young, but wise ahead of his years. His attitudes and perspectives are firmly rooted in science, mechanics and modernism. And he trained and worked as a civil engineer, so it’s no surprise those three attributes are crystal clear when speaking with him. More than anything, though, Theunis Fick is on a mission.

“I want to pursue a deep understanding of the physics of the acoustic guitar, while striving to master the craft of building one. I want to create instruments worthy of the most discerning musicians. I hope that, through a holistic understanding of the guitar and the application of engineering principles in designing and analyzing the instrument, the acoustic guitar can be optimized beyond its current form,” says Theunis sitting at his desk in Cape Town.

During his time studying a degree in civil engineering, Theunis embarked on a weekend guitar building course with Casimi Guitars—note this isn’t an apprenticeship (yet) but a Saturday course where students would study guitar building under the tutelage of Casimi luthiers, taking between 9 and 18 months to produce their own instrument.

But it wasn’t Casimi where Theunis had his first guitar making ‘moment’. The first builder he encountered was Marc Maingard (under whom both Casimi luthiers received their own tutelage).

“For a long time, I just had this idea that Marc Maingard was the only person in the world building guitars by hand. Which obviously is ridiculous! But I never looked into it when I was younger, and then a few years later I encountered a retired guy who was building guitars in his garage. He was a retired civil engineer, so then I was like, ‘Well I'm doing civil engineering, maybe one day when I retire, I can get into this?’,” he says. 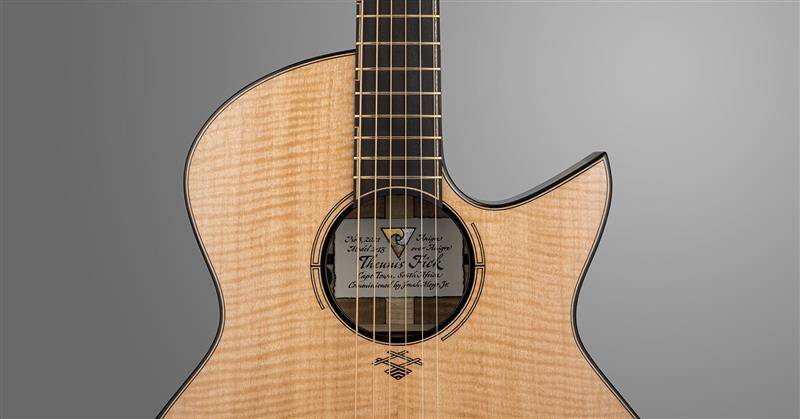 Sweet Harmony
Being a keen country and blues guitar player himself, one of the first guitars Theunies bonded with was a 30s ladder-braced Harmony. It was only when he snapped the neck of this guitar that he looked up repairers in Cape Town and found Casimi.

“I took the guitar to them on a Saturday, and I saw they were doing this course. It changed everything, I just realized, ‘Well, I can start doing this right now. I don't have to wait until I’m 65 and retired.’ So, I just signed up for that immediately. From the very beginning, you do the whole process. I remember that day I joined the course, I was just drawing the guitar; it was just pencil and paper, but at the end of the day, I knew that I'd found what I wanted to do. And since then it just gradually became a stronger obsession, to the point where it was all I was thinking about, all day,’ Theunis recalls.
Theunis ended up doing that course for three years and built two guitars in that time. Realizing that civil engineering wasn’t the career for him, and feeling invigorated from the Saturday course with Casimi, he quit his day job in 2018 and went to study lutherie at the Galloup School of Guitar Building in Michigan, USA. That course lasted six months, after which he returned to Cape Town and began his formal apprenticeship with Casimi Guitars in 2019.
“Going from doing one day per week with the Saturday course at Casimi when you’d build two guitars in three years to being at the Galloup school where I built three guitars in six months… well that was a massive shift,” he laughs.

“The apprenticeship with Casimi was more of a space-sharing arrangement. When I returned from the US, I didn’t have a workshop and they had a huge one. In exchange for the space and access to their tools and jigs and things, I would be help them out as their, well, apprentice. I was like a general contractor!” 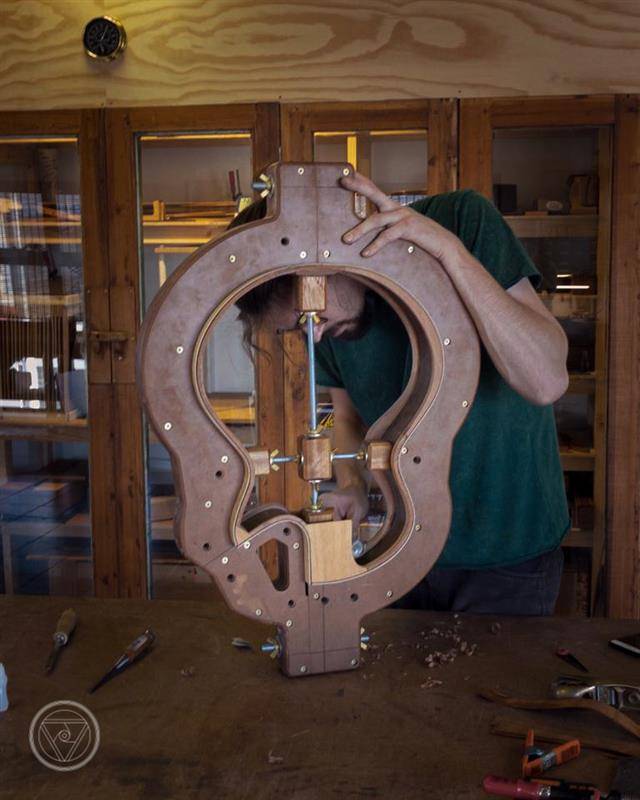 A Blank Slate
Working alongside Casimi, Theunis had the ability to see their projects come to fruition and question them when he ran into issues with his own builds. But the biggest thing Casimi taught him, was the way one can view the acoustic guitar outside of the traditionalist’s eyes.

“Casimi shaped the way I viewed guitars from the ground up. When I got there, I was already a blank slate in terms of my knowledge of guitars. They're obviously building guitars that are out of the norm, and aesthetically striking, and a lot of features that traditionally, you wouldn't see. I don't have the desire to just replicate the traditional designs, see how they work, and then gradually change them.”

“For me, it was just, you can build whatever you want, there are no rules, there's no limit to what you can do. If your imagination allows you to come up with an idea, you can probably do it. And that's something that I got from Casimi early on,” he says. 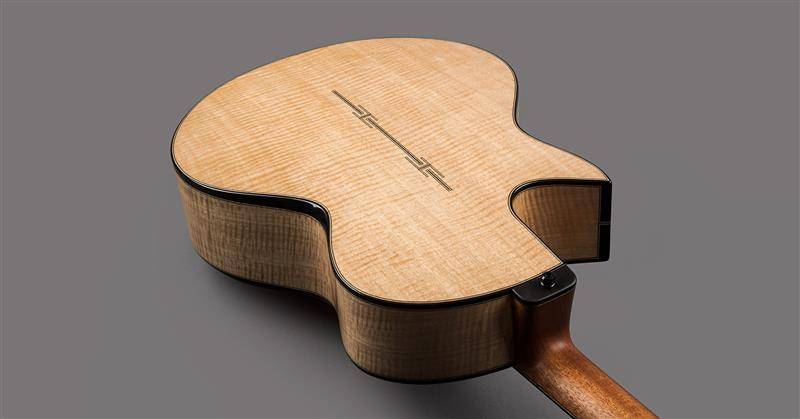 Does X Really Mark The Spot?
One of Theunis’ innovations is under the hood, as they say. Bracing is something that most builders put their own spin on (and in some cases redefine the way we think of steel-string acoustic guitar bracing; think Taylor head-luthier, Andy Powers). Here, Theunis is no different and has iterated on the traditional X brace, giving what he calls his ‘sparse lattice brace’.
“My bracing may look similar to a double-X brace, but that's not what it is. All the braces are the same dimension, and the angle on them is quite tight, so they provide a lot more longitudinal stiffness than diagonal stiffness. I also laminate them with carbon fiber strands, above and below the brace, which does a few things. The main good thing about it is that it doesn't creep over time.”

“If you build an all wooden-braced guitar, and you went very light with everything, over time the guitar's going to distort quite a bit, under the string loads. With the carbon fiber, it should prevent that from happening, which means you can go lighter with your structure without being so concerned that things are going to warp over time. My approach is to distribute the stressors as evenly as possible across the top, which allows me to then make the top of it very light.”

1, 2, 3
Theunis currently builds three models: Model 1, Model 2, and Model 3. The Model 1 is a small-bodied, 12-fret guitar, inspired by the comfortably-sized blues guitars of the 1920s, but executed with modern aesthetics, performance and tonality in mind. The short 24.625” scale length and compact body create a guitar which is extremely easy and comfortable to play for extended periods of time.

“As with all of my models, the scale length is selected based on the body size and the aim of placing the bridge as close to the centre of the lower bout as possible. In keeping with tradition, the Model 1 does not feature a cutaway, however a 13-fret model with a slightly longer scale length will be developed to provide extra access to the upper frets, without compromizing on the placement of the bridge,” he says of his Model 1. “Personally, that's my favorite size of guitar. It's just so comfortable. It doesn't feel like you're sitting behind the guitar, it's like there's a guitar in your lap.”

The point of departure for the design of his flagship model, the Model 2, was to create a medium-sized, modern acoustic guitar with a 12-fret body join. The constraints introduced by the desired body size and the goal of placing the bridge as close to the centre of the lower bout as possible, dictated the selection of a 25” scale length. A deep cutaway was deemed appropriate to provide access to the full extent of the fingerboard. An alternate arrangement was also developed, which comprises a 13-fret body join and a 25.5” scale length—the Model 2-13.

“For those who desire a larger instrument, the Model 3 is currently under development. It will offer the player an ergonomically and aesthetically pleasing alternative to the traditional dreadnought. The longer 26” scale length provides additional tension to drive the larger top plate and, together with a 12-fret body join, ensures that the bridge is placed optimally in the centre of the lower bout.” 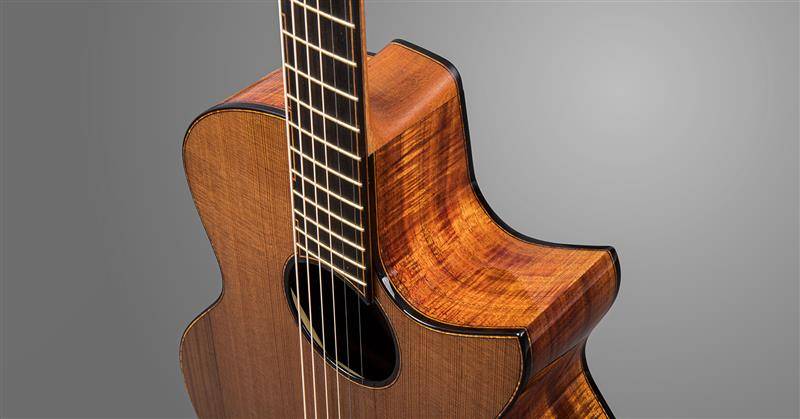 In Pursuit Of...
No matter what model, Theunis’ build philosophy pursues four goals: playability, responsiveness, pitch accuracy and structural stability.
“Structurally, my philosophy is basically to overbuild everything that isn't involved in making sound. And everything that is involved in making sound, building it as lightly as possible. So, I'm doing structured sides. It's something that I first saw on Dion James Guitars, Rye Bear is doing it as well,” he explains.

Essentially, the sides are two skins of wood with a core layer sandwiched between them. The sides end up being 9mm thick and are incredibly well structured. This means that no energy is wasted in the sides, because they don't vibrate.

“On traditional guitars, where you just have a single-skin sides, they do vibrate. But they're not effective, they're not contributing to the sound, they're just wasting energy. And so with this more modern way of doing it, with very thick structured sides, you don't lose that energy there. That energy stays in the top and it also means that the structure of the guitar is much more substantial. So, over time, the likelihood of any deformation is lower because there's just so much more stiffness there.”

“I’m very happy to be working with The North American Guitar to get my instruments in the hands of players around the world. It’s an honour to be listed along with some of my guitar-building idols. I’m excited to see where this partnership takes us,” Theunis finishes.